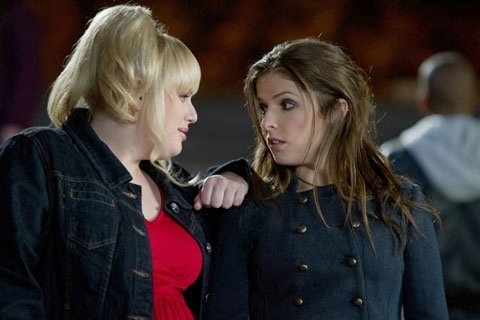 NEW YORK (CNS) — Extravagant musical TV shows and movies are all the rage, from the campy "Glee" to the stern-faced "Step Up Revolution."

Some of these productions are calculated to appeal exclusively to aspiring entertainers. Others attempt to use song and dance to proclaim a message, whether it be the importance of self-confidence or of social justice.

"Pitch Perfect" (Universal) avoids these two missteps, offering instead a comedy that is happy to sing its own tune, peopled by an eclectic array of engaging characters. Its occasional lapses into off-key humor, moreover, represent rare departures from a generally pleasing tone.

Loner freshman Beca (Anna Kendrick) — a wannabe DJ with a taste for dark eye shadow and remixed tunes — finds herself a fish out of water at fictional Barden University. But a chance encounter with overly friendly fellow student Chloe (Brittany Snow) — who discovers Beca’s vocal abilities by overhearing her sing in the shower — leads to Beca’s membership in Chloe’s a cappella group, the Bellas.

The Bellas are on track to compete in an annual completion they lost in spectacular fashion the previous year. As they recruit a gaggle of new cohorts, including the audacious Fat Amy (Rebel Wilson) — she calls herself that, we learn, to preempt insult — Beca clashes with the ensemble’s traditionally minded leader Aubrey (Anna Camp). She also finds romance with fellow music lover Jesse (Skylar Astin), despite the fact that Jesse belongs to a rival band of all-male warblers.

Director Jason Moore’s multi-melody romp features pop hits whose origins range from the 1980s to the present — from Simple Minds to Rihanna, endowing it with wide appeal.

While Kay Cannon’s enjoyable screenplay — adapted from Mickey Rapkin’s 2008 book "Pitch Perfect: The Quest for Collegiate A Cappella Glory" — is mostly wholesome, some salty language and a lax outlook on premarital sexuality bar recommendation for youngsters.

The film contains implied nonmarital relationships, adult themes and references, including to aberrant sexuality, a few uses of profanity, occasional crude and crass language and an obscene gesture. The Catholic News Service classification is A-III — adults. The Motion Picture Association of America rating is PG-13 — parents strongly cautioned. Some material may be inappropriate for children under 13.