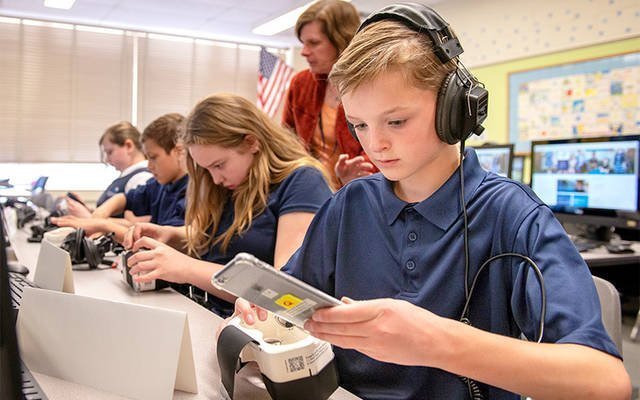 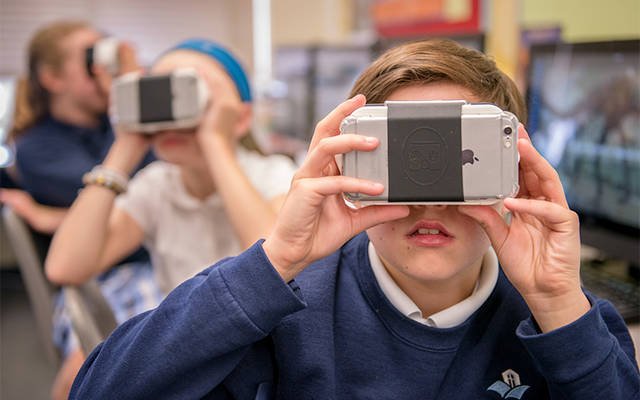 PITTSFORD — Technology students at St. Louis School have traveled to Jupiter, the International Space Station and other far-off destinations without ever leaving their classroom.

Such travel has been made possible through the use of virtual reality, which teacher Leonor Rivera incorporated into her fifth-grade technology class during the 2017-18 school year.

After attending technology workshops and reading about the educational benefits of virtual reality, Rivera proposed her idea of using the technology to Principal Fran Barr. Rivera then inserted a letter in the school’s parent newsletter, asking for donations of gently used iPhone 6s, the main pieces of equipment needed for the initiative. In return, she received 16 anonymous donations.

“It’s the wonderful donations from the families that is actually making it possible for us to do this,” said Rivera, who noted that such additional devices as 3-D viewer attachments, headphones and a teacher iPad were purchased through a New York State grant. “We were very blessed.”

Using an iPad, Rivera led the class through the expeditions as students followed along using 3-D viewers attached to their iPhones. Rivera monitored the students’ behavior using the iPad and could tell who was viewing the material she wanted them to see.

“It is like you are taking the kids into the museum,” she said of using Google Expeditions. “They are following you inside their headset, and you are telling them, ‘Look at the American bison, look at the moose, look at the T. rex,’ and you can watch the kids moving around, seeing it and listening to the information.”

Rivera also has used such self-guided apps as the NBC Sports Virtual Reality App “Be An Athlete,” in which a student can view sports action from the athlete’s point of view, such as Olympic hockey and downhill skiing.

A popular app among her students was a virtual reality tour of the White House, where the students used their headsets and viewers to tour the White House with President Barack Obama and first lady Michelle Obama.

“I enjoy virtual reality. It is actually very interesting,” said fifth-grader Sarah Gargano. “You put on the goggles and it’s actually like you are in, not a whole new world, because it is your world, but seeing things from a different angle and perspective is actually quite eye-opening.”

Rivera said the response to the new technology has been great, not only from students, but from their parents as well. For example, she said a fifth-grader who had taken a virtual trip to Barcelona could talk about the city with his mother, who had visited Barcelona during college.

“She (the mother) told me that they had one of the best conversations as a family in a long time,” Rivera said.

Due to such positive feedback, the school is considering using virtual reality with students in other grades.

“They (the younger children) are always asking when they get to do it,” Rivera said. “So we are exploring the option of pushing it down to fourth and third grade, depending on what the material is and what we can do (with it).”