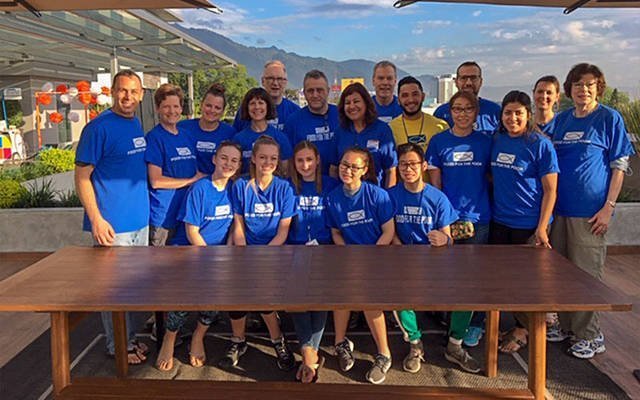 Volunteers from Church of the Transfiguration’s Global Solidarity Ministry traveled to Honduras in February. (Photo courtesy of Lauren Burruto)

In February five teens and 13 adults from Church of the Transfiguration in Pittsford traveled to the village of Macuelizo in Honduras, where they painted a bakery and built houses. They interacted and forged friendships with the Hondurans, and they will never be the same, noted Mary Jo Brandt, one of the Pittsford travelers.

“I think for the teens it’s life-changing. I don’t care what age are, you can’t go on a trip like this and not be profoundly changed in some way,” she remarked.

The trip was part of Church of the Transfiguration’s Global Solidarity Ministry, which has its roots in a pair of long-standing “sister parish” relationships the Pittsford parish used to have. Approximately once a year parishioners would raise money for these sister parishes in Russia and Ghana, but the Pittsford parishioners didn’t really have any personal, face-t0-face interaction with members of those sister parishes, noted Lauren Burruto, coordinator of the current Global Solidarity Ministry.

After researching various options and working through a months-long discernment process based on the Ignatian spiritual exercises, the current ministry was formed and Church of the Transfiguration began working with Food For the Poor to build up impoverished communities in other countries. The ministry first focused its efforts on the community of Valle Verde in El Salvador. Over the course of five years, Transfiguration parishioners raised enough money to renovate Valle Verde’s community center, refurbish a chapel, and build an elementary school and a number of homes, Burruto said.

Ministry volunteers — both teens and adults — also traveled several times to Valle Verde, where they formed friendships with the El Salvadorians.

“It ended up being a really amazing experience,” Burruto said. “It was really awesome, and we really changed that community because of all the phases of improvement.”

After five years however, violence broke out in El Salvador, and Food For the Poor determined it was too dangerous to continue sending people to that region, Burruto said. The Global Solidarity Ministry then began raising money to build homes, latrines and a water system in Nicaragua. Eventually, unrest in that region forced the ministry to withdraw from that project as well.

The ministry’s volunteers began the discernment process once more.

In December 2018 the ministry’s coordinator announced to the parish that they would begin working in the Macuelizo community in Honduras. This community’s needs can be split up into a number of small projects the Pittsford parish hopefully will be able to complete in several phases, Burruto said.

Housing is one of those needs, Brandt said, noting that many of the village’s residents live in extremely modest homes , many with thatched roofs and walls made of sticks and mud.

The village’s Sabaoth Baking Group — a group of 12 women and two men in Macuelizo — also has been operating out of a severely inadequate space and is in need of a formal bakery space and equipment. Funding this bakery would cost $30,000 but would bring economic opportunities and wholesome food to the village, Burruto said.

“We decided to fund the bakery first and follow up with as many houses as we could possibly fund,” Brandt said.

Transfiguration parishioners quickly raised the money for the bakery, which was constructed by the time parishioners visited the village in February. They were able to apply a coat of exterior paint and provide the bakers with aprons that had been handmade by parishioners. Being able to see the fruits of parishioners’ fundraising efforts and financial sacrifices was a spiritually uplifting experience, Brandt said.

“It really is a remarkable thing for us to go through and it helps us build community in our own church, and it is addictive,” she said. “You see 10 homes being built, 10 families being impacted, and you say, ‘We could do 10 homes again next year.’”

The gratitude shown by the Hondurans also encourages Transfiguration parishioners to continue their efforts, Brandt said.

“They don’t even realize they’ve repaid us just by being who they are,” she said, noting that the Hondurans’ spirituality and faith are inspiring.

The February trip was rooted in faith and prayer, Brandt added.

“These (impoverished conditions) are hard things to see and hard things to process when they’re not in a spiritual context,” she said. “What we try to do ‚Ä¶ is really discuss how the (Holy) Spirit is moving through us this whole week and where God is talking to us.”