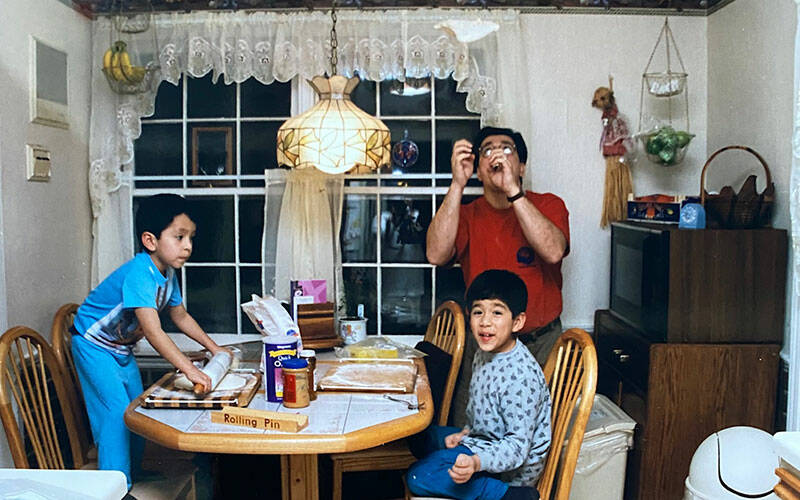 Ed was a great cook and a fun dad. When the boys were little, Ed taught the boys to make pizza in our tiny kitchen. I went to another room to give them special time. I heard Ed and the boys laughing. I smiled feeling blessed to have such a great husband and father. To capture the fun, I took a picture of them. Ed was tossing the dough in the air. Sean was rolling dough. Jordan was cheering. After I took the picture, I went back to the other room but kept listening. All of a sudden I heard, “Oh no!”I rushed in to see what happened. Pizza dough was stuck on the kitchen ceiling. Yikes!

The boys said, “It was dad’s fault. He said he could throw the dough higher than the pizza parlor man.” We all just stared at the dough on the ceiling. Then it fell to the floor. You could hear a pin drop. Then Ed started to laugh. Then I laughed. Then the boys broke out in laughter. We all belly laughed until tears streamed down our faces. We made the pizzas and enjoyed eating them.

At bedtime, the boys kept talking about how much fun they had making the pizzas. When we were in bed, Ed hugged me tight. He kissed me and thanked me for not getting upset about the pizza on the ceiling. He said that when I joined in on the laughter, the boys knew it was OK to laugh and have fun. He said I helped make the pizza making into a great memory that the boys would never forget.

Now, when our “boys” cook with me in the same tiny kitchen, we remember the many times we cooked with Ed and the fun we had.

Leonor “Leo” and Ed Rivera were members of the local Worldwide Marriage Encounter community for 32 of their 34 years of marriage until Ed unexpectedly died of a genetic heart defect on Aug. 1, 2020. To read more of Leo and Ed’s blogs, visit https://catholiccourier.com/viewpoints/blogs/to-have-and-to-hold.