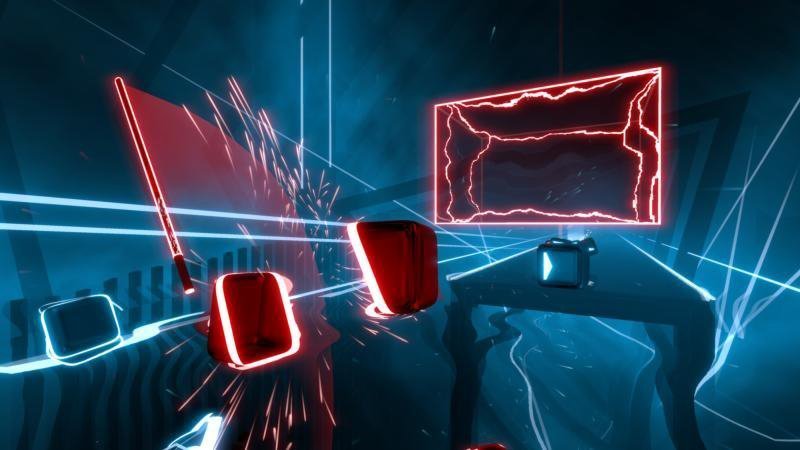 This is an image from the video game "Beat Saber." (CNS photo by Beat Games)

NEW YORK (CNS) — Very few games these days can leave you breathless. But “Beat Saber” achieves that effect in the course of just one song.

Produced by Beat Games, this virtual-reality rhythm title requires players to combat incoming flying objects with a lightsaber while grooving to the selected music track. The future has arrived — and it’s a fun experience for the entire family.

Using one or two blades at a time, gamers slash at scrolling cubes called beat blocks while avoiding exploding bombs and obstacle walls. The beat blocks have directional arrows indicating which way to swing the controller. If the player uses two sabers, the blocks will be either red or blue, and must be struck with the saber of the same color.

Each level of the campaign mode has a particular objective such as reaching a certain score or recording no more than five bad swings. In addition, there’s also a scoreboard mode reminiscent of vintage arcade games and a competitive player-vs.-world environment where people across the globe can compete to be at the top of the scoreboard, even though there is no direct interaction with other gamers.

“Beat Saber” provides a full-body experience, requiring players to slash wide arcs across the screen and crouch down low to avoid flying obstacles. If movements are kept in rhythm, more points can be earned per beat block.

Quick thinking is a must in order to achieve the highest scores. As a result, “Beat Saber” proves to be quite the workout, both physically and mentally. Effects can be adjusted to make levels easier or more difficult.

The only thing approaching violence is the attack on the beat blocks, which causes them to split in half in flying debris.

Additional song packs may be purchased and downloaded to expand the game, ranging in price from $2 to $40. Most songs are custom made for “Beat Saber” — the Imagine Dragons music pack being an exception. Refreshingly, the lyrics are free of troubling language.

Parents should be aware that developers of virtual-reality games do not recommend them for children under 12, due to the potential impact that this technology may have on their physiological development. So, while the content of

“Beat Saber” is suitable for all, its mechanics are not.