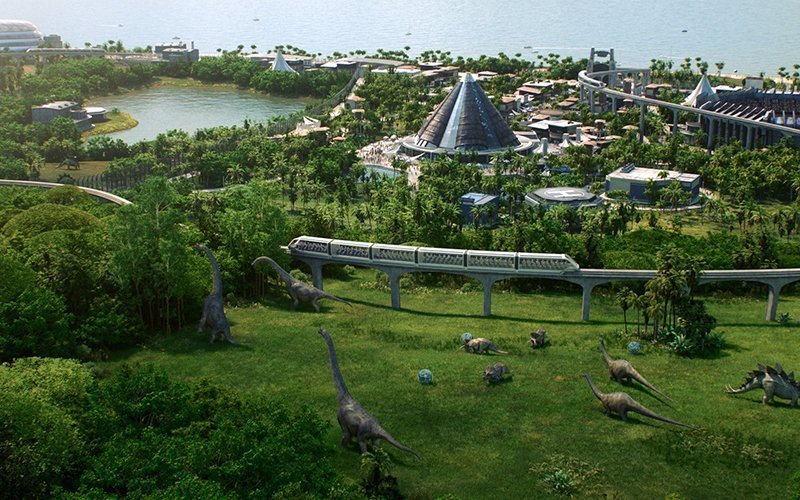 This is a scene from the video game "Jurassic World Evolution." The Catholic News Service classification is A-II -- adults and adolescents. The Entertainment Software Rating Board rating is T -- teens. (CNS photo by Frontier)

While its graphics are relatively tame, the game’s objectives are demanding, making it too complex for little kids, though it’s suitable for most others.

As they work toward the goal of crafting five-star enclosures across a landscape of tropical islands, gamers are guided by a recurring character from the books and movies, mathematician Dr. Ian Malcolm (voice of Jeff Goldblum). Malcolm offers advice — but makes wittily pessimistic predictions about how things are bound to go wrong as well.

Players can create over 40 different species from DNA acquired on fossil expeditions. Various resort amenities are also available to them, including monorails, hotels, viewing towers, shops and restaurants.

But gamers’ responsibilities are weighty. They must stay on top of potential power outages and the occasional dino escape while juggling contracts with three administrative divisions: Science, Security and Entertainment. Losing reputation points with any of these offices may provoke an attempt at sabotage.

There’s potential animal mayhem to contend with too. Dinosaurs can engage in fights with incompatible carnivores or with other members of their herd and will attack smaller herbivores. They can also break out of their pens and chow down on patrons. Even then, however, blood effects are minimal.

Other concerns include the need for gamers to keep their naturally free-roaming but captive animals healthy and safe in an enclosed environment. Habitats, moreover, must suit the specific preferences of different species. Otherwise, the dinosaurs won’t thrive.

The game’s educational value is considerable. Players learn about paleontology, dinosaur behavior and the hypothetical use of prehistoric genomes to recreate extinct animals. On a more practical level, they also learn how to manage their parks and avoid plunging their islands into an economic depression.

For players of faith, “Jurassic World Evolution” poses interesting questions about gene editing and evolution. While it contains no specific teaching about modifying animal DNA, the Catechism of the Catholic Church encourages “respect for the integrity of creation. Animals, like plants and inanimate beings, are by nature destined for the common good of past, present, and future humanity” (2415).

The shared premise of the books, films and games that make up the “Jurassic” universe remains, of course, a matter of science fiction. But the situation first imagined by author Michael Crichton can provide food for thought about the principles that should guide and shape real-world scientific advancements.

The game contains some nongraphic violence. The Catholic News Service classification is A-II — adults and adolescents. The Entertainment Software Rating Board rating is T — teens.