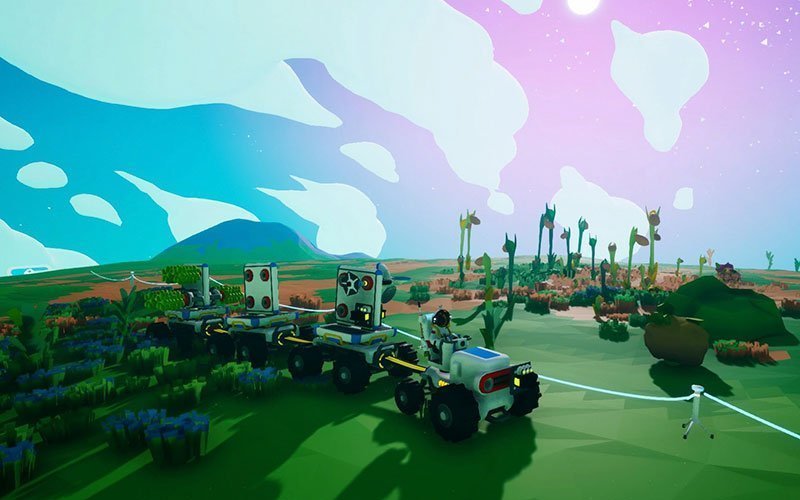 This is a scene from the video game "Astroneer." (CNS photo by System Era Softworks)

NEW YORK (CNS) — The final frontier of space has never been as carefree as it is in “Astroneer” (System Era Softworks). Players of all ages will enjoy this survival sandbox game whose creators imagine the 25th century as an Intergalactic Age of Discovery, a time when space explorers roam the galaxy.

It follows in the footsteps of popular titles such as “Minecraft” and “Startopia.”

Playing as a solo astroneer (the game’s term for an astronaut explorer) or with a friend in co-op mode, gamers are given little more than a handful of tools for the brave new world on which they land. With no in-game objectives, the only apparent task is to gather resources across the vivid landscape and build up the home base.

In order to unlock new structures for building, players scan certain plants and minerals for research points, called bytes, which are then exchanged in the blueprint catalog. Resources fuel the 3-D printers that store all the blueprint information for helpful modules, ranging from vehicles for long journeys to research chambers that help produce more bytes.

Along with monitoring oxygen to fend off suffocation, gamers must manage power. The more energy a module receives, the faster it will complete a given task.

Planets are designed to be terraformed, and each one has a variety of resources. Additionally, they all hold mysteries that can be unearthed.

With the relaxed, synthetic soundtrack in the background and no predators to worry about, farming in “Astroneer” is exceptionally peaceful.

Violence is kept to a minimum. The only example results from the character death mechanic. Players who fall from a great height or fail to keep their oxygen tank levels up will die — and then respawn.

The gorgeous artwork is saturated with color but the graphics occasionally glitch, causing characters or vehicles to clip through the ground. Additionally, the terraforming mechanic is clunky and unintuitive.

These frustrations will not necessarily hamper progress, but they may diminish enjoyment. Still, it’s worth pushing through them to experience the tranquil planetary exploration “Astroneer” offers.

The creators of this colorful title imagine the 25th century as an Intergalactic Age of Discovery, a time when space explorers roam the galaxy. As one such voyager, players terraform planets, mine resources, craft machinery and discover strange ruins. Violence is kept to a minimum. Players can die, but then they respawn. Though the gorgeous artwork is vivid, the graphics occasionally glitch, causing characters or vehicles to clip through the ground. And the terraforming mechanic is clunky and unintuitive. Still, it’s worth putting up with these frustrations to enjoy the tranquility of this survival sandbox game. Playable on PlayStation 4, Xbox One and Windows. Mild cartoonish violence. The Catholic News Service classification is A-I — general patronage. The Entertainment Software Rating Board rating is E — everyone.