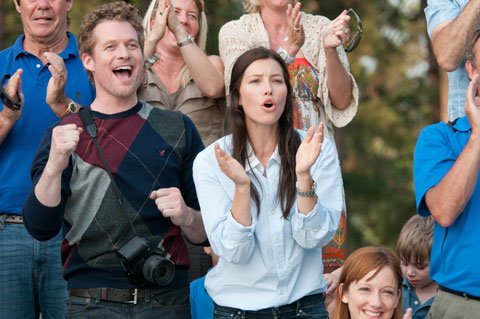 NEW YORK (CNS) — Viewers who frequent romantic comedies will have noticed the genre’s drift toward the sordid.

Last year alone saw the release of "What’s Your Number?" with its promiscuous heroine, and "Friends With Benefits," a film whose slang-based title aptly captured the misguided values its script took for granted. Throw the duo of "Sex and the City" movies into the mix, and the evidence for this tendency seems hard to miss.

The good news about "Playing for Keeps" (FilmDistrict) is that director Gabriele Muccino and screenwriter Robbie Fox buck this unwelcome trend. The bad news is that, while their sports-themed project sees family values taking the field, the result, when the final whistle blows, is respectable — but not especially compelling — entertainment.

There’s something static about the proceedings, which focus on the personal travails of washed-up British soccer star George (Gerard Butler).

Conscious of his shortcomings as a flawed husband to his American ex-wife, Stacie (Jessica Biel), and as an absentee dad to their son, Lewis (Noah Lomax), George has recently moved to suburban Virginia, where Stacie had relocated, in an effort to play a larger role in the boy’s life. With the same goal in mind, he agrees to coach Lewis’ youth soccer team, teaching them the finer points of the beautiful game as part of his efforts at reform and repair.

George, however, continues to dream of reconciliation with Stacie. So, a single, off-screen sexual escapade aside, he shows unusual discretion for a male movie character by consistently turning down opportunities for immoral gratification.

George is adamant, for instance, in refusing Patti’s adulterous advances, all the more so since giving in to them would represent a betrayal of Carl, whom George has come to regard as a friend.

Low-key and mostly amiable, "Playing for Keeps" makes a positive impression but not a very deep or lasting one.

The film contains an implied nonmarital encounter, brief nongraphic sexual activity, fleeting gory images and some crude and crass language. The Catholic News Service classification is A-III — adults. The Motion Picture Association of America rating is PG-13 — parents strongly cautioned. Some material may be inappropriate for children under 13.