'Please pray for us,' Cuban writes on Facebook after Ian - Catholic Courier 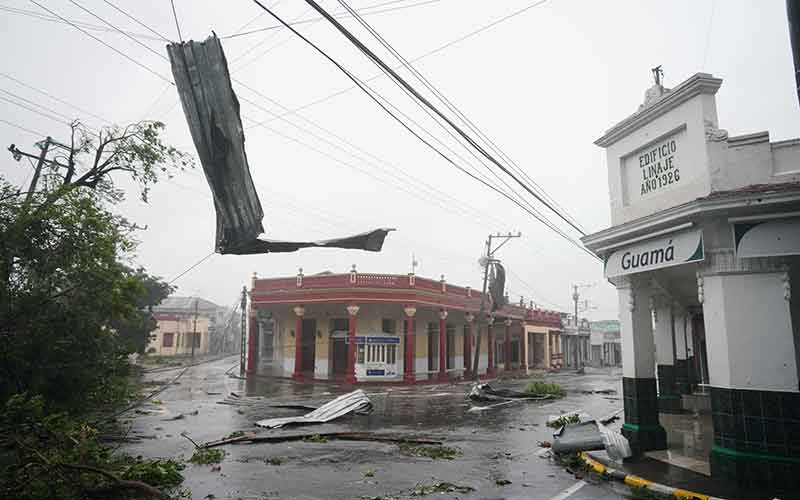 Debris covers a street as Hurricane Ian passes through Pinar del Rio, Cuba, Sept. 27, 2022. The entire island of Cuba is without power, following the destructive winds and flooding left in the wake of Hurricane Ian. Preliminary reports point to major damage in Pinar del Rio. (CNS photo by Alexandre Meneghini/Reuters)

Bishop asking for prayers for God’s protection from Hurricane Ian

The Diocese of Pinar del Rio posted on Facebook photos of hurricane damage to its cathedral and four other churches.

“We are still without electricity and have a bad (internet) connection. The damage has been horrible in both churches and houses. It was a long and intense night and morning. Please pray for us,” someone wrote in the Facebook post.

Cuban authorities so far have reported two deaths and said some electricity has been restored, mostly in the capital, Havana, but that it would take a while for the island to return to normal.

Pinar del Rio Diocese showed damage to the exterior to its San Rosendo Cathedral, as well as of broken stained-glass windows and other structures at Consolación, La Palma, Viñales and San Cristóbal churches.

Cuban President Miguel Díaz-Canel toured Pinar del Rio, an area known for its tobacco industry, and said it was too early to tell the full extent of the damage, but the governments of Mexico and Venezuela said they would help, and he thanked them for their “solidarity in the most difficult times.”

Media website 14ymedio reported that 5,000 “tobacco houses” were damaged and said there was untold destruction of crops in the area.

Major city centers such as Santiago de Cuba, close to the island’s iconic Shrine of Our Lady of Charity of El Cobre, remained without power as Hurricane Ian headed toward Florida Sept. 28.