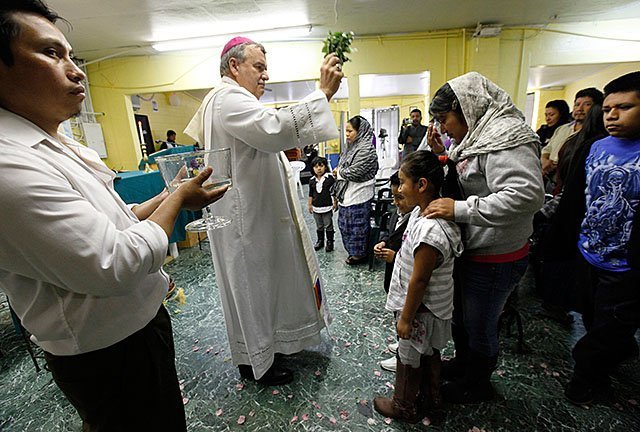 Chicago Auxiliary Bishop John R. Manz blesses children and adults following Mass with migrant workers and their families inside a makeshift chapel in Boaz, Ala. Bishop Manz, a member of the U.S. bishops' Subcommittee on Pastoral Care of Migrants, Refugees and Travelers, toured Alabama in October visiting workers, praying with them and talking about the challenges they face. It was his 10th such trip.

BIRMINGHAM, Ala. (CNS) — For the past 10 years, Auxiliary Bishop John R. Manz of Chicago has traveled all over the United States visiting migrant workers on behalf of the U.S. Conference of Catholic Bishops.

And he said that life and conditions are pretty much the same for the workers now as when he started making the trips.

"I don’t think a whole lot has changed in my mind, sadly. It hasn’t gotten much better," Bishop Manz said during a trip to Alabama to visit migrant workers.

His travels have taken him to states such as California, Utah, Oregon, Ohio, Florida, Washington, Arkansas and downstate Illinois. From Oct. 21 to 24, Bishop Manz visited migrant workers in rural Alabama as a member of the Subcommittee on Pastoral Care of Migrants, Refugees and Travelers.

The annual trips are sponsored by the U.S. Conference of Catholic Bishops’ Secretariat of Cultural Diversity in the Church. Scalabrini Sister Myrna Tordillo, an assistant director of the secretariat, accompanied Bishop Manz to Alabama.

The trip originally was to visit migrant farmworkers, but, Bishop Manz said, "in more recent years, it has morphed into a ministry to rural immigrant communities."

The growth of big processing centers, whether for dairy or meat, has enabled immigrants to stay in one place for longer periods.

"It wouldn’t be migrant workers in the sense that years ago they would come in and work for a season and go back, although we do have some of that," he said. "This is a phenomena in the last 10 to 15 years that draws your immigrant community because it’s usually dirty work, it’s not high paid and there’s a great need for it."

Many of the workers Bishop Manz visits are undocumented.

In rural Alabama, many of the workers are employed in chicken processing plants putting out about 300,000 pieces of chicken a day. Bishop Manz said the immigrant workers are attracted to these rural areas because they don’t stand out. They fall under the radar.

"They are kind of quietly there making their money, working two, sometimes three shifts," he told the Catholic New World, newspaper of the Chicago Archdiocese, in an interview in Alabama. "And naturally the companies are going to get folks who are going to work for the minimum wage to do this kind of work because, in spite of what many people say, that these folks are coming up and taking away jobs, who’s gonna do it?"

As an example, he related how some of the folks told him there is now a special glove that covers both the thumb and index finger because a lot of people would have fingers cut off when cutting the chickens. And most of the workers must provide their own health care.

On these trips, Bishop Manz spends a lot of time listening to the people, hearing their personal stories of working in the fields or in the plants.

"Are the people on this trip telling me anything different? I’m afraid not," he said.

However, the presence of many Guatemalans in Alabama caught his attention. Spanish isn’t their first language so it poses more challenges for them and for the church to minister to them.

"I still wonder if anybody has a good hand on how many Guatemalans are here working in the country that are undocumented. It’s easily in the tens of thousands, if not in the hundreds of thousands because of all of the violence down there after the war," he said.

Migrant or undocumented immigrant workers live in a constant state of fear that they will get picked up and be deported. They come here because they need the money, but they would most likely rather be at home, Bishop Manz explained.

"Normally, unless you’re talking about young folks looking for a little change of pace, you’re not going to take up roots and take the experience of going across the border unless something’s really pushing you. That’s the famous push-pull factor. That the pull is, ‘Hey, there’re jobs there.’ The push is, ‘Hey, we got nothing here so you can’t lose anything by going up there.’"

The fear stays with them, even if they’ve been in the United States for 20 years, because they can be picked up anytime.

"Yesterday, the owner of the store and the wife came out and they were very distraught because their one son had been picked up for a driving violation," Bishop Manz said. "Of course he’s in jail now. He’s not documented."

Just getting to the U.S. from Central America is perilous, he said.

"Women raped, people robbed, beat up, and if they make it to the train they may fall off at night and have an arm severed or are crushed on the tracks," he said. "Then they get to the border and they get ripped off by the people bringing them up here."

On his visits, Bishop Manz said, he tells the people that the larger church is there for them, that the bishops have been lobbying on Capitol Hill for immigration reform for many years.

He also tries to encourage them in their faith, "saying that our faith is meant to console us, to encourage us, but it also challenges us. We have to live together as a church and be together and help each other. Sometimes that means even some confrontation."

"It’s a humanitarian crisis," he added. "There has to be concern for what’s going on because it affects us and we’re involved in it because we’re eating these things."

Catholics need to be aware of these workers in their communities and be concerned about what they face, the bishop, he said. "Some really nasty, nasty stuff goes on behind the scenes — not only harassment but extortion, rapes, separation of families. Some of it is very, very evil."

Bishop Manz noted that most every immigrant group coming to America has faced the same conditions.

"They’re the bottom of the ladder, but does that make it good that we continue that?" he asked. "Haven’t we learned anything along the way?"

The current immigration system lends itself to more abuses, he said.

"As a society we want our pleasures — our Chicken McNuggets and all that — but where does it come from?" he asked.

Duriga is editor of the Catholic New World, newspaper of the Chicago Archdiocese.