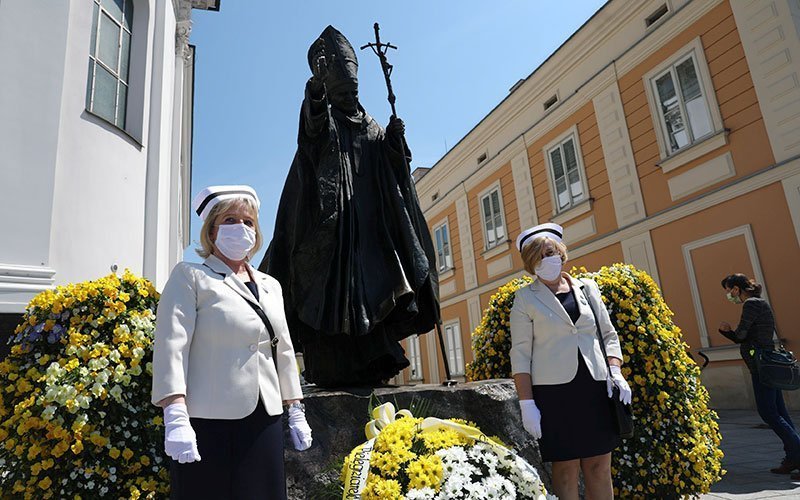 Nurses in protective masks stand in front of a statue of St. John Paul II in Wadowice, Poland, May 18, 2020, during a ceremony to commemorate the 100th anniversary of the late pope's birth. (CNS photo by Dawid Zuchowicz, Agencja Gazeta via Reuters)

WARSAW, Poland (CNS) — Poland’s Catholic bishops urged citizens to learn from St. John Paul II in coming to terms with COVID-19, as the 100th anniversary of his birth was celebrated with Masses and other events across his homeland.

In a pastoral letter read nationwide May 17, the day before the anniversary, the bishops said it was worth asking what message St. John Paul would have for Poles in May 2020.

“St. John Paul II bore his own sufferings and uncertainties, believing God ultimately guides human history, that death is not the Creator’s desire. If the Polish pope lived today, he would certainly well understand people experiencing isolation and quarantine,” the bishops said.

Noting the Polish saint’s contributions “to the history of our country, Europe and the world, and to the history of universal church,” the bishops encouraged prayers for his intercession to “help in stopping this pandemic, for the sick, the dead and their families, for the doctors, medical services and all those risking their lives for our safety. May this centenary invoke brotherhood and unity among us.”

Masses to mark the centenary were celebrated May 18 with limited congregations or online, to comply with COVID-19 restrictions.

More than 400 billboards in Krakow displayed quotes from the late pope. The new St. John Paul II Basilica released birds for the celebration; the local airport had giant balloons, and the archbishop’s residence had a laser display.

During commemorations at Poland’s Jasna Gora national sanctuary, a letter was read from President Andrzej Duda, praising St. John Paul’s contributions to ending the Cold War and to European integration, as well as to the “ethical foundations for a new economy, politics and international cooperation.”

A canonization process for his parents, Karol and Emilia Wojtyla, was launched May 7 by the Krakow Archdiocese, with the same postulator, Msgr. Stanislaw Oder, who led work on the late pontiff’s sainthood cause.