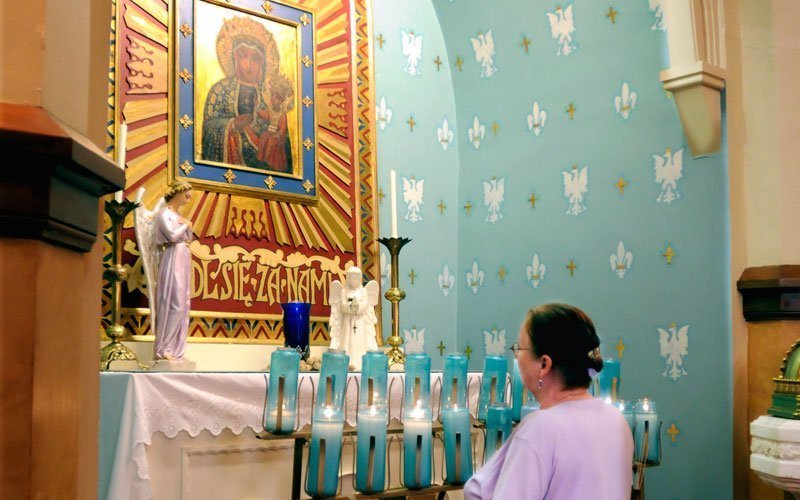 A woman prays Aug. 2 at the shrine to Our Lady of Czestochowa at Rochester’s St.Stanislaus Kostka Church.

ROCHESTER — A new shrine to Our Lady of Czestochowa and a portrait of Pope John Paul II, who was the Catholic Church’s first Polish pope, will be unveiled during the Nov. 16 Mass to celebrate the 100th anniversary of the construction of St. Stanislaus Kostka Church.

Bishop Matthew H. Clark will celebrate the bilingual Mass, according to parish officials. The bishop also will bless a new shrine to Our Lady of Czestochowa, which will feature a commissioned portrait of Pope John Paul II.

The parish hopes the shrine will draw people to the Black Madonna, patroness of Poland, through the example of John Paul, who was so devoted to her, said Kathy Urbanic, the local Polish community historian.

“What we’re trying to do with the shrine is bring more honor to Our Lady by reminding people of the honor John Paul gave to her in his life,” she said.

The Polish parish was founded around 1890 with about 100 families clustered at a small church on St. Stanislaus Street, Urbanic said. By 1906, the community had grown to about 450 families and needed a new building, she added, which was constructed from 1907 to 1909. The parish now includes about 1,000 families, according to information from the church’s pastor, Father Adam Ogorzaly.

Restoration of the historic building, which was completed in 2004, included repair of its cupola, replacement of four copper mini-domes and restoration of its interior nave ceiling.

“After the church was built, it became the center of what became a prominent and thriving Polish community in Rochester,” Urbanic noted. “For a lot of people it’s (still) home base, where they still come.”

Parishioner Mary Okoniewicz said she was baptized, made her first Communion and received confirmation at the church and still lives in the Hudson Avenue neighborhood where the church is located. Her parents, both Polish natives, almost immediately became parishioners after they moved to Rochester in the early 1900s.

“Anybody that was Polish or came from Poland lived around here,” said Okoniewicz, 80. “Everybody spoke the same language. The church was like, not just a religious, but a social activity.”

The interior decoration of the church remains a draw for many people, as does the Polish Mass, she added. Many of the building’s unique elements also relate to its Polish roots — from statues of Eastern European saints to the Polish inscriptions written on its stained-glass windows, Urbanic said.

“Because it’s such a magnificent building, our people really treasure it,” she remarked. “But it’s a beautiful house of worship in its own right.”

The new shrine also may attract more people to the church, Okoniewicz added.

“It’s good for the parish … and will make it more vibrant,” she said. “In my mother’s time … a lot of people came over with an image of the Black Madonna. They probably prayed to her to come to America for a better life.”

The church — as any Polish church or home would — always had an altar dedicated to the Black Madonna, Urbanic noted. But, parishioners chose to create a new shrine with the icon and a painting of John Paul II praying the rosary and gesturing to Our Lady of Czestochowa because of the honor the pope bestowed on her throughout his life, she added.

“Over centuries, the relationship between the Polish people and (Our Lady of Czestochowa) can’t be overstated,” Urbanic said. “It’s so potent, emotional, powerful. Really, she is regarded as the queen of Poland.”

EDITOR’S NOTE: The bilingual Mass to celebrate the 100th anniversary of the construction of St. Stanislaus Church at 1124 Hudson Ave. will be held at 10 a.m. Nov. 16. A reception will follow in the church auditorium. For more information, call 585-467-3068.