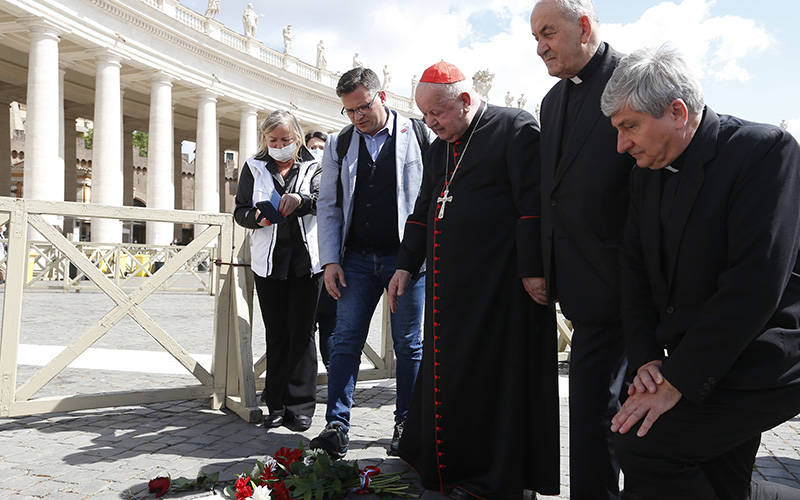 Cardinal Stanislaw Dziwisz, the former secretary of St. John Paul II, looks at the spot of the May 13, 1981, assassination attempt against the Polish pope, after placing flowers in St. Peter’s Square at the Vatican May 13, 2021. Cardinal Dziwisz and a small group of Catholics gathered in the square to mark the 40th anniversary of the shooting. In 1981 then-Msgr. Dziwisz cradled the pope after the shooting. (CNS photo by Paul Haring)

The man soon was joined by members of “Polska w Sercu” (Polish at Heart), a group of Polish Catholics who have lived for years in Rome but have not forgotten their homeland or their beloved pope.

Cardinal Stanislaw Dziwisz, who served for more than three decades as personal secretary to the late pope, arrived to process with the group to the plaque where someone already had placed two red roses. They added a bouquet of gerbera daisies — red and white — the colors of the Polish flag.

Cardinal Dziwisz had begun marking the anniversary of the May 13, 1981, assassination attempt by concelebrating Mass with Cardinal Konrad Krajewski and dozens of Polish priests at the tomb of St. John Paul in St. Peter’s Basilica.

Remembering how Mehmet Ali Agca shot and “almost mortally wounded” St. John Paul, “I still can feel his body slip as if paralyzed and fall into my arms,” Cardinal Dziwisz said in his homily. “I see his blood dripping onto his white pontifical cassock, staining my hands and clothes. I also hear a continual, fainter and fainter, repetition of the invocation, ‘O Mary, O my Mother!’”

“How difficult it is to forget the bang of the would-be assassin’s gunshots, which in a single moment could have put an end to this extraordinary pontificate,” the cardinal said, thanking the medical personnel who saved his life and the people all over the world who prayed for his recovery.

“Today, 40 years after that event, and 16 years” after his death, “I think with fear of what it would have been like if we had lost him in St. Peter’s Square back then,” he said. “How poor and different the world and our homeland, Poland, would have been without his witness of faith and doctrine, without his indications and his warnings in the face of the dangers and turmoil that can threaten us in today’s world.”

Noting the day’s feast of Our Lady of Fatima and St. John Paul’s conviction that she saved his life, Cardinal Dziwisz also turned to Our Lady of Fatima with “a trusting prayer for the world fighting against the coronavirus pandemic,” for a greater commitment to keeping the Ten Commandments and following the beatitudes “and, finally, for fidelity to the teachings and mission left to us by St. John Paul II the Great.”