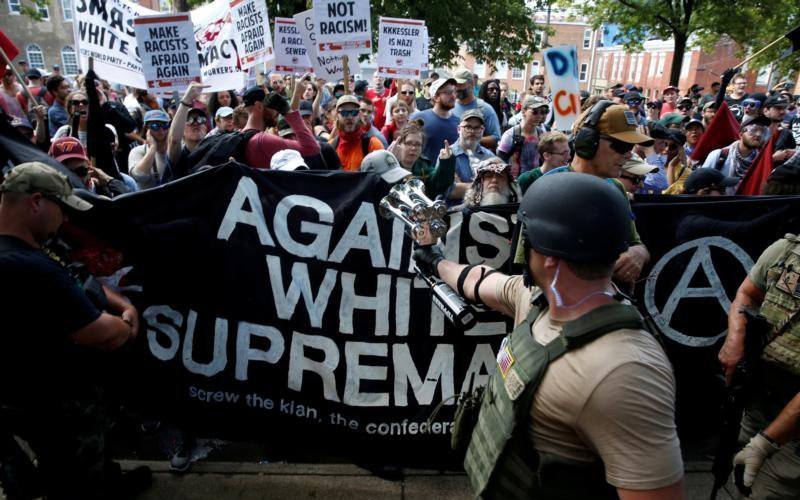 White nationalists are met by counter-protesters in Charlottesville, Va., Aug. 12 during a demonstration over a plan to remove the statue of a Confederate general from a city park.

President Donald Trump recently said something important about the bigotry and violence on display in Charlottesville, Va., and elsewhere.

His Aug. 21 remarks at Fort Myer in Arlington, Va., were largely ignored, and in fact he has said far less admirable things beforehand and afterward. But what he said then deserves attention regardless of who said it.

The president’s speech was primarily about military strategy in Afghanistan and South Asia. But for six paragraphs, he commented on the kind of society our troops have a right to come home to, after fighting alongside comrades of all races, colors and creeds.

“Loyalty to our nation,” he continued, “demands loyalty to one another. Love for America requires love for all of its people. When we open our hearts to patriotism, there is no room for prejudice, no place for bigotry, and no tolerance for hate.” He urged healing divisions at home, so returning soldiers “will find a country that has renewed the sacred bonds of love and loyalty that unite us together as one.”

Some will find this hard to swallow, from someone often seen as our most divisive political figure. But at least in this speech he told “white nationalists” and other bigots of the far-right who consider themselves superpatriots that they are not patriots at all — that their racist ideology is, in a word, un-American.

It is un-American because it violates our most fundamental American ideals. Yet it was brutally on display when half our nation practiced slavery, and it has tormented us ever since. As Bishop Robert E. Barron recently said, it is “the original sin of America,” a sin that “has not been thoroughly expunged.”

Some conclude that racists must themselves be expunged, by violent means if necessary. As a prominent member of the leftist “antifa” (short for “anti-fascist”) movement recently declared: “You need violence in order to protect nonviolence.”

First, even a worthy end does not justify a means that attacks the dignity of other human beings. Violence is not morally neutral — it sends its own message that other people do not count as I do.

Second, the left does not have clean hands in terms of the equal rights of all human beings. Catholic teaching rejects all invidious discrimination based on race, creed, age, disability or condition of dependency. Campaigns for abortion and assisted suicide — especially, though not exclusively, supported by the secular left — teach that some human lives are worthless compared to others.

Extremists on both right and left also have little regard for the religious freedom of Catholics. The Ku Klux Klan once sought to bar Catholic schools from educating children; the secular left seeks to prohibit those committed to Catholic teaching from running hospitals, florist shops or bakeries.

Third, unjust ideologies poison society by first poisoning those who hold them. The Catholic response is to show compassion for those so gravely misguided, to love them, to pray for their conversion. If hate for their evil ideas becomes hate for them as people, then we, too, stop respecting others as children of God.

Politics alone will not stop our violence and division. Even patriotism cannot do everything. These ideologies indicate a sickness of the soul, and only those calling upon and working with the healer of souls will get to the root of the problem.