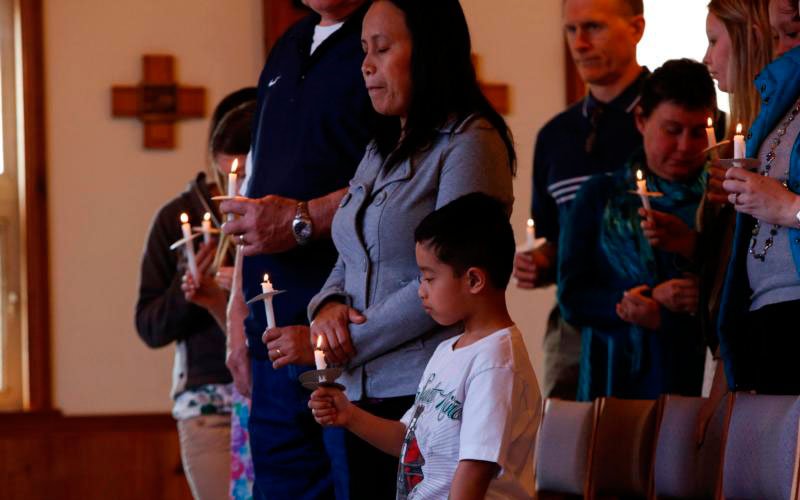 Families gather for Easter Mass in 2014 at St. John by the Sea Church in Klawock on Prince of Wales Island in southeastern Alaska. (CNS photo by Nancy Wiechec)

NEW HAVEN, Conn. (CNS) — A new poll shows that 73 percent of respondents who identified as Catholic said they would be attending church for Easter and 53 percent of all Americans said they plan to attend church services on Easter Sunday.

Among respondents who said they were practicing Catholics, 95 percent said they planned to go to Easter Mass.

For Good Friday, 54 percent of Catholics said they will attend services, with 78 percent of practicing Catholics planning to do so. Catholics and other Christians traditionally spend a portion of the day in a spirit of silence, recollection and prayer.

The Knights of Columbus, based in New Haven, sponsored the survey conducted by the Marist Poll.

“There is no Easter Sunday without Good Friday,” Anderson said in a statement accompanying release of the poll results March 29. “Those who take the time to attend the solemn afternoon liturgy will benefit from a rich source of meditation and reflection, and it will better prepare them for Easter and make it an even more joyous day.”

The survey also found that younger Catholics — under 45 years old — are just as likely to attend Mass on Easter as those 45 years of age or older. (74 percent to 72 percent).

The survey of 1,271 adults was conducted March 19 through March 21 by the Marist Poll. Adults age 18 and older residing in the continental United States were interviewed in English by telephone using live interviewers. The margin of error was plus or minus 3.1 percentage points.