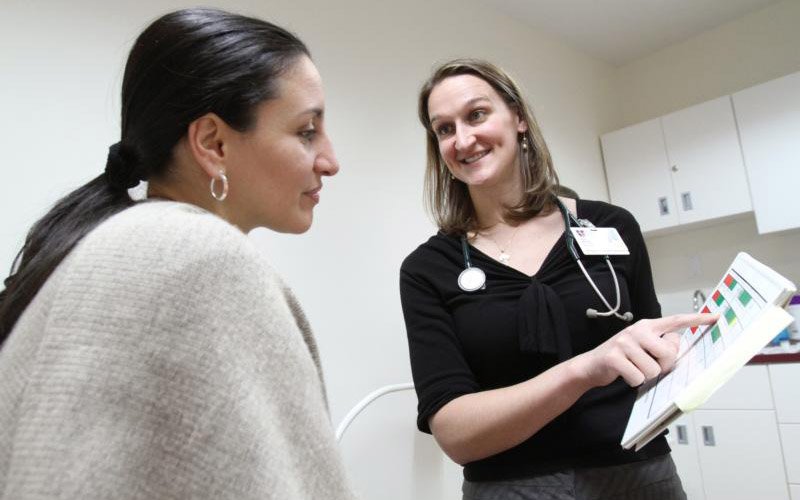 Dr. Anne Nolte, right, a family physician with the National Gianna Center for Women's Health and Fertility in New York, is pictured with a patient in 2009. (CNS photo by Gregory A. Shemitz)

Should doctors and nurses be forced to take part in procedures that violate their conscience? It’s a timely question. New federal regulations to enforce existing conscience protection laws are being challenged in federal courts.

This question is the subject of a public opinion poll commissioned by the U.S. Conference of Catholic Bishops. The survey, conducted by Heart+Mind Strategies, interviewed more than 1,000 adults in July. The results were released Sept. 18.

After learning what the new federal regulation does, respondents supported it 59 percent to 21 percent. By a similar margin, 60 percent to 22 percent, they supported modifying the law to protect those with moral objections to “gender reassignment” procedures.

This is especially timely: A state appellate court in California is allowing a lawsuit to proceed against a Catholic hospital that declined, on religious grounds, to remove a healthy uterus from a woman seeking to identify as a man.

This message, however, is lost on many members of Congress, including some seeking higher office.

Witness a pending federal bill, the Do No Harm Act (S. 593, H.R. 1450). It would undermine protections for religious freedom by carving out exceptions to the Religious Freedom Restoration Act.

For example, the Religious Freedom Restoration Act would no longer apply to any case involving “access to, information about, referrals for, provision of, or coverage for, any health care item or service,” which surely encompasses abortion and other attacks on life as well as gender reassignment procedures.

The bill also states that the Religious Freedom Restoration Act should not be interpreted to exempt anyone from a “generally applicable law” when that would impose “meaningful harm, including dignitary harm,” on someone else.

The term “dignitary harm” does not appear in the U.S. Code, and this bill does not define it. But it has been used to sue bakers and others who decline on religious grounds to participate in same-sex wedding celebrations.

Plaintiffs claim that, by disagreeing with the couple’s definition of marriage, believers offend their dignity. Or as legal scholar Sherif Girgis says, they seek to “punish expressive conduct whose message they abhor, just because they abhor it.”

Under these standards, the Little Sisters of the Poor and other religious institutions, which the U.S. Supreme Court says are protected by the Religious Freedom Restoration Act from forced involvement in coverage for contraceptive and abortifacient drugs, could be put back in the cage built for them by radical secularists.

Catholic doctors, nurses and hospitals could be forced to take part in abortion and other procedures that Hippocrates condemned when he made “do no harm” a central principle of medical ethics.

Who is sponsoring this bill? One hundred and thirty-four House Democrats and 28 Senate Democrats — including four senators running for president, led by prime sponsor Sen. Kamala Harris.

When the Religious Freedom Restoration Act was enacted in 1993, all but two Senate Democrats voted for it and President Bill Clinton enthusiastically signed it into law. The party’s leaders in recent years have taken a disturbing turn against religious freedom and conscience rights. That is not a direction most Americans want to take.