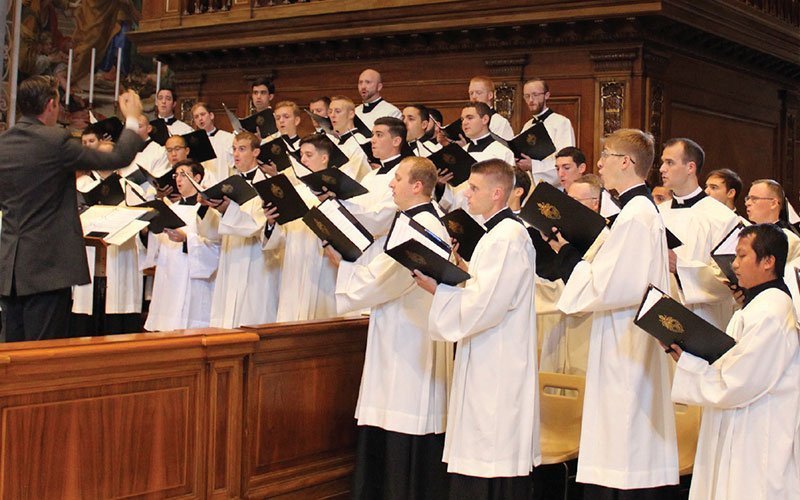 WASHINGTON (CNS) — To celebrate the 160th anniversary of the Pontifical North American College in Rome, the seminary has released a CD of its choir singing motets and liturgical pieces. Diocese of Rochester’s seminarian Aaron Kelly sings tenor in the choir.

The music was recorded in May 2019 at the Immaculate Conception Chapel, the seminary’s main chapel.

Like a lot of things, release of the CD was upended by the coronavirus pandemic, according to Mark Randall, executive director of the North American College.

“It was always intended to be part of our 160th anniversary celebration, which was the last academic year,” Randall told Catholic News Service in a June 3 phone interview.

But because of the pandemic, classes at the North American College ended in mid-March, and the seminarians all flew back to their U.S. homes by the end of the month. Like millions of other students, they continued their learning online and continued to meet with formators via video chats. The seminary estimates that about 5,000 priests have walked through its doors since its founding in 1860.

The academic year ended in May, and the CD’s official release date was May 28, “so we kind of squeaked it in right at the end,” Randall said. He noted that, 15 to 20 years ago, the seminary released its first CD, although it was primarily organ music.

“For over a century and a half, the Pontifical North American College has served as America’s seminary in Rome,” said a May 28 statement from Father Peter Harman, the college’s rector, announcing the CD’s release. “Our talented student choirs over the years have greatly enhanced our liturgical celebrations to the inspiration of our students and the many guests we have hosted.”

The college’s Seminary Choir and the Cappella Sine Nomine, a smaller ensemble, whose voices are heard on the disc, sing weekly at the North American College’s Sunday Mass and Solemn Vespers, as well as larger liturgies such as the ordination to the diaconate in St. Peter’s Basilica each fall.

The CD isn’t for sale in stores, although any visitors to Rome will be able to purchase one at the North American College itself. The easiest way to order is through the seminary’s website, www.pnac.org. The cost is $12, including shipping. “We want to make it clear it’s not a fundraiser,” Randall told CNS.