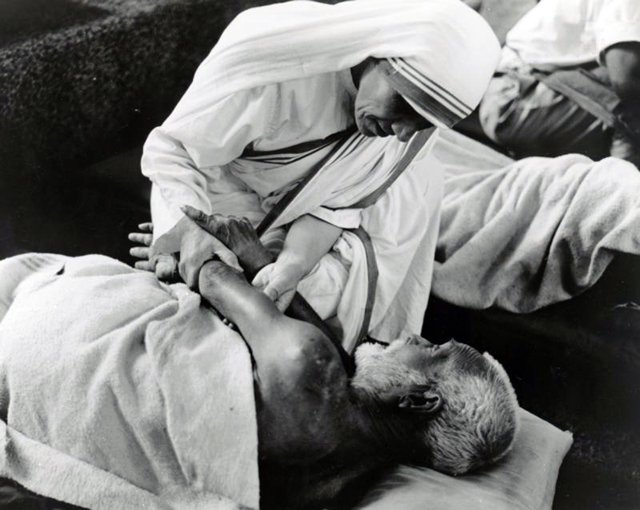 Blessed Teresa of Kolkata cares for a sick man in an undated photo.
By Junno Arocho Esteves
Catholic News Service
VATICAN CITY (CNS) — The poor, the suffering and those who minister to them will be at the center of celebrations leading up to the canonization of Blessed Teresa of Kolkata at the Vatican.
The main event — the canonization Mass — will begin at 10:30 a.m. Sept. 4, the Vatican announced Aug. 5.
A "family feast" for the poor, a musical, Masses and prayer vigils will precede her canonization, according to programs published by the Vatican and by the Missionaries of Charity, the order she founded.
Known as the "saint of the gutters," Mother Teresa was revered for ministering to the sick and the dying in some of the world’s poorest neighborhoods.
Born Agnes Gonxha Bojaxhiu in 1910 to an ethnic Albanian family in Skopje, in what is now part of Macedonia, Mother Teresa went to India as a Sister of Loreto in 1929. Receiving what she described as a "call within a call," she began her missionary work with the poor and laid the foundation for what would become the Missionaries of Charity.
Following her death in 1997, St. John Paul II waived the usual five-year waiting period and allowed the opening of the process to declare her sainthood. She was beatified in 2003.
The date of Mother Teresa’s canonization will coincide with the conclusion of the Year of Mercy pilgrimage for workers and ministers engaged in works of mercy.
Here are the main events planned around the canonization of Mother Teresa:
— Sept. 1, "feast for the poor and Missionaries of Charity family," including a musical based on Mother Teresa’s life.
— Masses Sept. 2 in various languages in Rome’s Basilica of St. Anastasia al Palatino and veneration of her relics. In the evening, a prayer vigil with solemn eucharistic adoration will be held at Rome’s Basilica of St. John Lateran with Cardinal Agostino Vallini, the papal vicar of Rome, presiding.
— Catechesis Sept. 3 by Pope Francis for the jubilee celebration of workers and volunteers for mercy. In the evening, a prayer and musical meditation will be held at Rome’s Basilica of St. Andrea della Valle followed by veneration of Mother Teresa’s relics and Mass.
— Canonization Mass Sept. 4. Pilgrims will be able to venerate St. Teresa’s relics in the evening at the Basilica of St. John Lateran.
— Celebration Sept. 5 of a Mass of thanksgiving and the first feast of St. Teresa of Kolkata in St. Peter’s Basilica with Cardinal Pietro Parolin, Vatican secretary of state, presiding. Pilgrims will be able to venerate the relics of St. Teresa at St. John Lateran in the evening.
— Sept. 6, continuing veneration of the relics of St. Teresa at St. John Lateran.
— Sept. 7-8, veneration of the relics of St. Teresa of Kolkata at Rome’s Church of St. Gregory the Great, along with the possibility of visiting her room at the convent of St. Gregory.
– – –
Follow Arocho on Twitter: @arochoju.
Copyright © 2022 Catholic News Service, Inc. All rights reserved. Linking is encouraged, but republishing or redistributing, including by framing or similar means, without the publisher's prior written permission is prohibited.