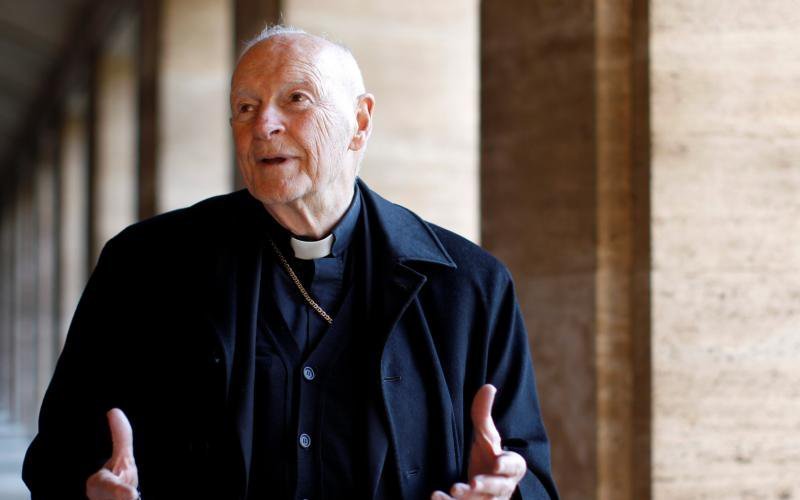 Pope Francis has accepted the resignation from the College of Cardinals of Cardinal Theodore E. McCarrick, retired archbishop of Washington, and has ordered him to maintain "a life of prayer and penance" until a canonical trial examines accusations that he sexually abused minors. Archbishop McCarrick is pictured in a 2013 photo at the Vatican. (CNS photo by Alessandro Bianchi/Reuters)

VATICAN CITY (CNS) — Pope Francis has accepted the resignation from the College of Cardinals of Cardinal Theodore E. McCarrick, retired archbishop of Washington, and has ordered him to maintain “a life of prayer and penance” until a canonical trial examines accusations that he sexually abused minors.

The announcement came first from the U.S. Conference of Catholic Bishops and a few minutes later from the Vatican press office.

The press office said July 28 that the previous evening Pope Francis had received Archbishop McCarrick’s letter of “resignation as a member of the College of Cardinals.”

“Pope Francis accepted his resignation from the cardinalate and has ordered his suspension from the exercise of any public ministry, together with the obligation to remain in a house yet to be indicated to him, for a life of prayer and penance until the accusations made against him are examined in a regular canonical trial,” the Vatican statement said.

In late June, Archbishop McCarrick, the 88-year-old retired archbishop of Washington, said he would no longer exercise any public ministry “in obedience” to the Vatican after an allegation he abused a teenager 47 years ago in the Archdiocese of New York was found credible. The cardinal has said he is innocent.

In the weeks that followed the announcement, another man came forward claiming he was abused as a child by Archbishop McCarrick and several former seminarians have spoken out about being sexually harassed by the cardinal at a beach house he had.

Although unusual, withdrawal from the College of Cardinals in such circumstances is not unheard of. Just 10 days before then-Pope Benedict XVI retired in 2013, Scottish Cardinal Keith O’Brien announced he would not participate in the conclave to elect Pope Benedict’s successor because he did not want media attention focused on him instead of the election of a new pope.

Pope Benedict had accepted the cardinal’s resignation as archbishop of St. Andrews and Edinburgh after reports that three priests and a former priest had accused the cardinal of “inappropriate conduct” with them going back to the 1980s.

One week after the conclave that elected Pope Francis, the Vatican announced the new pope accepted Cardinal O’Brien’s decision to renounce all “duties and privileges” associated with being a cardinal. He died March 19.

In a July 28 statement he said: “I thank the Holy Father for his leadership in taking this important step. It reflects the priority the Holy Father places on the need for protection and care for all our people and the way failures in this area affect the life of the church in the United States.”

In New Jersey, Cardinal Joseph W. Tobin of Newark, an archdiocese then-Archbishop McCarrick headed 1986-2000, stated July 28: “The somber announcement from the Vatican this morning will impact the Catholic community of the Archdiocese of Newark with particular force.”

“This latest news is a necessary step for the church to hold itself accountable for sexual abuse and harassment perpetrated by its ministers, no matter their rank,” Cardinal Tobin said. “I ask my brothers and sisters to pray for all who may have been harmed by the former cardinal, and to pray for him as well.”

Before being named to Newark, then-Bishop McCarrick was founding bishop of the Diocese of Metuchen, New Jersey, serving there 1981 to 1986. Other reaction from U.S. bishops included a strongly worded letter from Bishop Michael F. Olson of Fort Worth Texas, to the people of the diocese.

“Ministry in the church is a grace from God that carries with it sober responsibility. Ministry is not a right to be claimed by anyone as an entitlement; rather, it involves a convenantal trust established through our baptism as members of the church established by Christ,” he said.

“We see in the scandalous crimes and sins alleged to have been committed by now former Cardinal McCarrick, the violation of trust and the grave damage caused to the lives and health of his purported victims,” he continued. “The scandal and pain are compounded by the horrific fact that reportedly one of his victims was his first baptism after his priestly ordination.”

Bishop Olson said the former cardinal’s alleged crimes “have caused further damage to the integrity of the hierarchy and the mission of the church,” and as a result “his prompt reduction canonically to the laity should be strongly deliberated.”

The Texas bishop also said church leaders who knew of the former cardinal’s “alleged crimes and sexual misconduct and did nothing (must) be held accountable for their refusal to act thereby enabling others to be hurt.”

Bishop Olson added that the Fort Worth diocese “and I have zero tolerance for sexual abuse against minors, as well as against vulnerable adults by its clergy, staff and volunteers, including me as bishop.” He assured Catholics that any such allegation is taken seriously and swiftly acted on according to the diocese’s protocols.