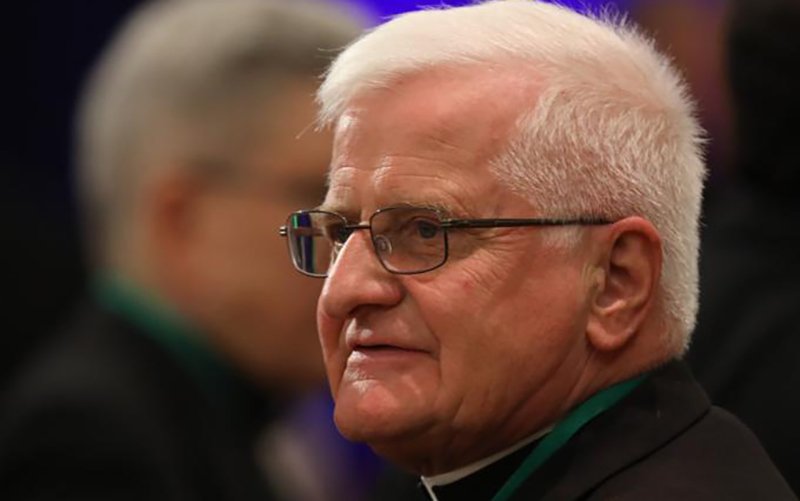 WASHINGTON (CNS) — Pope Francis has accepted the resignation of Auxiliary Bishop Edward M. Grosz of Buffalo, New York, who on Feb. 16 turned 75, the age at which bishops are required by canon law to turn in their resignation to the pope.

His retirement was announced March 2 in Washington By Archbishop Christophe Pierre, apostolic nuncio to the United States.

Bishop Grosz will continue to provide sacramental ministry throughout the diocese in his retirement, according to a diocesan statement.

Growing up in Buffalo’s Black Rock section, he attended Assumption School, the Diocesan Preparatory Seminary, both in Buffalo, and St. John Vianney Seminary in East Aurora, where he received a bachelor of arts degree in philosophy and a master of divinity degree.

He was ordained to the priesthood for the Buffalo Diocese May 29, 1971. After his ordination, then-Father Grosz attended the University of Notre Dame in South Bend, Indiana, where he earned a master’s degree in liturgy.

On May 24, 2004, the College of Consultors of the Diocese of Buffalo elected Bishop Grosz diocesan administrator. He served in that position until Oct. 28, 2004, when Bishop Edward U. Kmiec was installed as the 13th bishop of Buffalo.

For 11 years, Bishop Grosz was chaplain for the Felician sisters in Buffalo at their motherhouse in Cheektowaga.

In addition to his parish assignments, Bishop Grosz has had significant experience in administrative positions. From 1975 to 1980, he was the executive secretary of the diocesan Liturgical Commission. In 1976, Bishop Edward D. Head of Buffalo named him director of the diocesan Office of Worship. Fourteen years late he received his first pastorate at St. Philip the Apostle Parish.

In November 2003, Bishop Grosz became the chaplain of the Western New York Division of the Polish American Congress.

Bishop Grosz has held and continues to hold a number of positions on local, state and nationwide boards and committees. He was a representative of the Catholic dioceses of New York state to the national board of the Federation of Diocesan Liturgical Commissions; diocesan director of the Legion of Mary; spiritual moderator of the Blue Army of Our Lady of Fatima; and the director of the 600th Czestochowa Jubilee Celebration.

Bishop Grosz was diocesan coordinator of the visit to Buffalo of Cardinal Josef Glemp, primate of Poland, in 1991, as well as coordinator for the visit of Cardinal Henryk Gulbinowicz of Wroclaw, Poland. From 2005 to 2008, he served on the diocesan Strategic Planning Commission that developed and implemented the Journey in Faith and Grace, the parish reconfiguration plan.