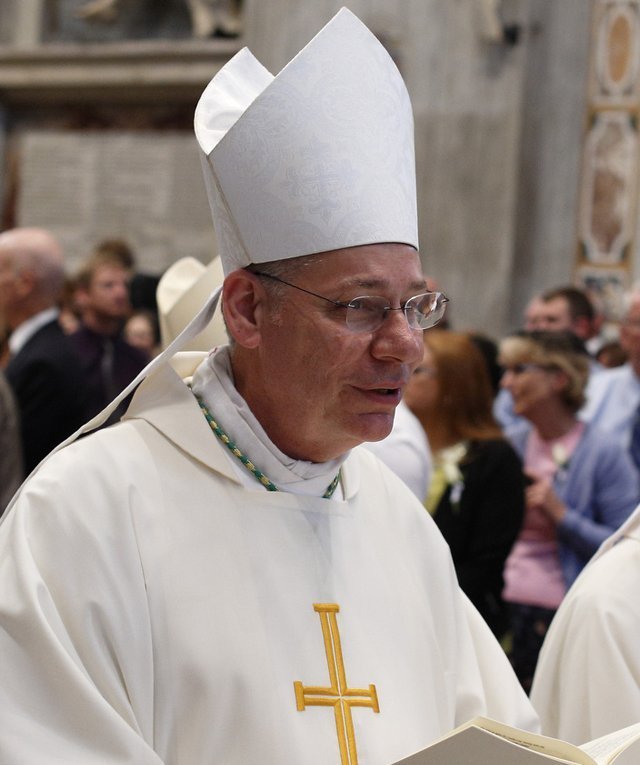 Pope Francis has accepted the resignation of Bishop Robert W. Finn of Kansas City-St. Joseph, Mo., who was convicted in 2012 on one misdemeanor count of failing to report suspected child abuse. Bishop Finn is pictured in a 2014 photo at the Vatican.

VATICAN CITY (CNS) — Pope Francis has accepted the resignation of Bishop Robert W. Finn of Kansas City-St. Joseph, Missouri, who was convicted in 2012 on one misdemeanor count of failing to report suspected child abuse.

The Vatican announced the bishop’s resignation April 21, specifying it was under the terms of the Code of Canon Law, which says, "A diocesan bishop who has become less able to fulfill his office because of ill health or some other grave cause is earnestly requested to present his resignation from office."

The pope’s acceptance of Bishop Finn’s resignation comes after members of the Pontifical Commission for Child Protection announced that one of their priorities was to ensure measures were in place to promote the accountability of bishops in protecting children and upholding the Vatican-approved norms for dealing with accusations of child abuse made against church workers.

In an interview published April 20, Marie Collins, a member of the commission and a survivor of abuse, told the news site Crux, "I cannot understand how Bishop Finn is still in position, when anyone else with a conviction that he has could not run a Sunday school in a parish. He wouldn’t pass a background check."

Bishop Finn is the highest-ranking U.S. Catholic official to face criminal charges related to the priest sex abuse scandal that erupted within the U.S. church in 2002.

In September the Vatican had asked Canadian Archbishop Terrence Prendergast of Ottawa, Ontario, to make an apostolic visitation to the Diocese of Kansas City-St. Joseph.

On Sept. 6, 2012, Bishop Finn was convicted of one count of failing to report suspected child abuse and acquitted on another count in a brief bench trial.

In August 2012, the former pastor pleaded guilty to five counts of producing or attempting to produce child pornography. He received 10 years for each count. In September 2013 he started his 50-year sentence in federal prison.

After the priest entered his guilty plea, the diocese filed a petition with the Vatican Congregation for the Doctrine of the Faith that he be laicized.

The child pornography was first discovered in December 2010. Authorities were not notified until six months later, when a search of the priest’s family home turned up images of child pornography.

Judge John M. Torrence of Jackson County Circuit in Missouri issued the verdict and sentenced the bishop to two years’ probation. The charges carried a possible maximum sentence of one year in jail and a fine of up to $1,000. Torrence dismissed the charges against the diocese after sentencing the bishop.

Several of the steps taken by the diocese to address abuse, including mandatory training of all staff and all clergy and putting in place reporting requirements, were among conditions Torrence set for Bishop Finn’s probation.

Jack Smith, diocesan communications director, said in a statement that Archbishop Joseph F. Naumann of Kansas City, Kansas, has been named diocesan administrator until a successor to Bishop Finn is appointed.