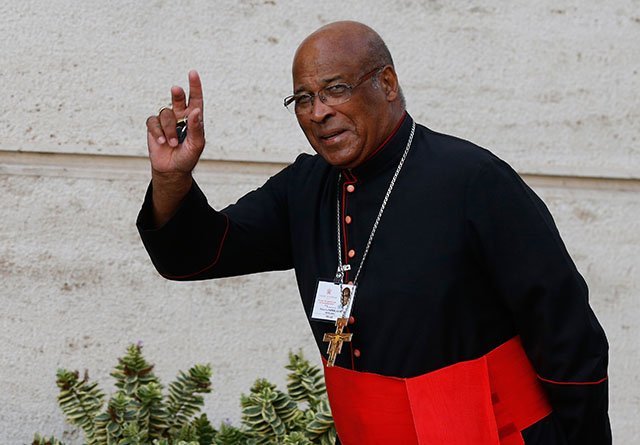 Cardinal Wilfrid F. Napier of Durban, South Africa, arrives for a session of the extraordinary Synod of Bishops on the family at the Vatican in this Oct. 14 file photo. Pope Francis has added Cardinal Napier to be one of four synod presidents at the October 2015 Synod of Bishops on the family. The move means Africa will be better represented, and it also gives a leading role to a prelate who was critical of some aspects of the 2014 synod.

VATICAN CITY (CNS) — Pope Francis named the leaders of the October 2015 Synod of Bishops on the family, adding Cardinal Wilfrid F. Napier of Durban, South Africa, to a roster otherwise unchanged from that of the October 2014 extraordinary synod on the same subject.

The move means that Africa will be represented at the highest level of the 2015 gathering alongside Asia, Europe and the Americas. The appointment also gives a leading role to a bishop who openly criticized some workings of the 2014 synod.

The Vatican announced Nov. 21 that Cardinal Napier will serve as one of four synod presidents, joining Cardinals Andre Vingt-Trois of Paris, Luis Antonio Tagle of Manila and Raymundo Damasceno Assis of Aparecida, Brazil, the three presidents of the October 2014 assembly.

Hungarian Cardinal Peter Erdo of Esztergom-Budapest will reprise his role as relator, with the duty of guiding discussion and synthesizing its results, and Italian Archbishop Bruno Forte of Chieti-Vasto will again serve as special secretary, assisting the general secretary, Cardinal Lorenzo Baldisseri.

Asked about his appointment, Cardinal Napier told Catholic News Service Nov. 21 that the "reason given was quite clearly that Africa should be represented, and when you think of the vitality of the church in Africa, that does make sense."

Two days before the end of the 2014 synod, Pope Francis added Cardinal Napier and Archbishop Denis Hart of Melbourne, Australia, to the committee drafting the assembly’s final report, for what the cardinal said were also reasons of geographic diversity.

As a member of the synod’s ordinary council, Cardinal Napier took part in a Nov. 18-19 meeting to review the last synod and start planning for the next. Pope Francis joined the council on the first day of the meeting.

The cardinal said the council discussed the possibility of returning to the Vatican’s earlier practice of publishing summaries of bishops’ remarks in the hall. During the 2014 synod, by contrast, spokesmen furnished reporters with selected paraphrases and occasional quotations, none attributed to specific bishops.

Publishing summaries of floor speeches might help prevent misunderstandings, the cardinal said, recalling controversy over the 2014 synod’s midterm report, which used remarkably conciliatory language toward people with ways of life contrary to Catholic teaching, including the divorced and civilly remarried and those in same-sex unions or other non-marital relationships. Cardinal Napier was one of several synod fathers who suggested at the time that the document did not accurately reflect the assembly’s views.

"If you just put out the (midterm report) without publishing the interventions, how will people outside, journalists or whoever, how will they be able to tell whether the document actually reflects what was said on the synod floor?" Cardinal Napier told CNS. He said at least one member of the council argued "forcefully" that publishing summaries of floor speeches would allow readers to assess whether a subsequent synod report had been influenced by "ideological" considerations.

The cardinal said the council will also consider how to make the team of expert advisers to the drafting committee "more representative of the world" than its counterpart at the 2014 gathering, which he said consisted only of speakers of "romance languages."

The council also agreed to send the preparatory document for the next synod to the world’s bishops’ conferences in early December. That document will consist of the last synod’s final report, "accompanied by a series of points that may assist in its reception and analysis," according to a Vatican statement.

Late in 2013, the Vatican sent bishops’ conferences a questionnaire, widely published on the internet, whose results served as the basis for the agenda of the 2014 synod. Jesuit Father Federico Lombardi, the Vatican spokesman, told reporters Nov. 20 that there would be no such questionnaire for the next synod, and bishops’ conferences would be free to determine how best to consult their local churches in preparation for the gathering.