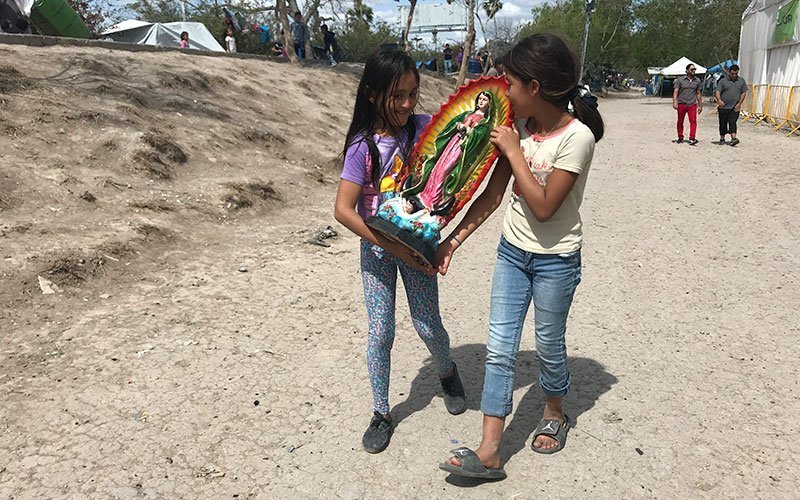 A file photo shows girls carrying a statue of Our Lady of Guadalupe through a tent camp in Matamoros, Mexico. (CNS photo by David Agren)

VATICAN CITY (CNS) — Among the many titles under which Catholics invoke Mary, Pope Francis has asked them to add “Mother of Mercy,” “Mother of Hope” and “Comfort of Migrants.”

Cardinal Robert Sarah, prefect of the Congregation for Divine Worship and the Sacraments, sent a letter to the presidents of bishops’ conferences around the world asking that the titles be inserted into the “Litany of the Blessed Virgin Mary,” more commonly known as the “Litany of Loreto.”

The litany, which begins by invoking God’s mercy, then turns to Mary, asking for her prayers.

The Litany of Loreto traces its origins back to the 16th century and already had close to 50 titles for Mary with verses like “Holy Mother of God, pray for us” and “Queen of All Saints, pray for us.”

Cardinal Sarah’s letter, released June 20 by the Vatican, said, “The church, which walks along the pathways of history as a pilgrim toward the heavenly Jerusalem and enjoys inseparable communion with Christ her spouse and savior,” entrusts itself to the intercession of Mary, “who believed in the word of the Lord.”

“We know from the Gospel that the disciples of Jesus had, in fact, learned from the very beginning to praise her as ‘blessed amongst women’ and to count on her maternal intercession,” he said.

The titles for referring to and seeking assistance from Mary are “innumerable,” the cardinal said, but the pope wanted formally to recognize more of them.

“Mother of Mercy,” he said, should follow “Mother of the Church” in the litany, then comes “Mother of Divine Grace” and the insertion of “Mother of Hope.”

Further down, after invoking Mary as “Health of the Sick” and as “Refuge of Sinners,” he said, Catholics should add “Comfort of Migrants.”