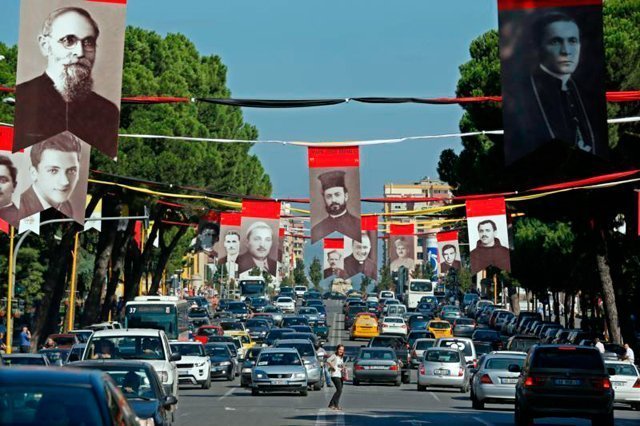 Photographs of Albanian priests killed during the former communist regime hang in the main boulevard of Tirana, Albania, Sept. 17, 2014.
By Junno Arocho Esteves
Catholic News Service
VATICAN CITY (CNS) — Pope Francis advanced the sainthood cause of an Irish Jesuit, who was raised Anglican, and dedicated his life to the sick and the dying as well as the cause of 38 Albanian martyrs killed during the communist persecution of Christians.
During an April 26 meeting with Cardinal Angelo Amato, prefect of the Congregation for Saints’ Causes, the pope signed 12 decrees, including one recognizing a miracle attributed to the intercession of Jesuit Father John Sullivan.
Born in Dublin to a wealthy family in 1861, he joined the Catholic Church at the age of 35 and entered the Jesuits four years later. Father Sullivan was known for traveling many miles on bicycle and on foot to comfort the afflicted in County Kildare, Ireland.
With the decree regarding the miracle, a beatification ceremony can be scheduled for Father Sullivan.
Formally recognizing the martyrdom of the Albanian martyrs and a group of Spanish martyrs, Pope Francis set the stage for their beatification ceremonies as well.
The Albanian martyrs include Archbishop Vincent Prennushi, a Franciscan prelate, and 37 other Catholics killed between 1945 and 1974.
The religious persecution the atheist state waged from 1944 to the 1990s was so severe that it prompted Pope Francis to make Albania the first country in Europe he visited.
During the visit in September 2014, the pope was moved to tears after listening to the stories of two survivors of Albania’s communist crackdown against the church; the pope called the country "a land of heroes and martyrs."
The martyrs of the Spanish Civil War who will be beatified are Benedictine Father Jose Anton Gomez and three companions who were killed in 1936.
In recognizing a miracle attributed to Blessed Alfonso Maria Fusco, an Italian priest who founded the Congregation of the Baptistine Sisters of the Nazarene, Pope Francis cleared the way for his canonization.
In causes just beginning their way toward sainthood, the pope signed decrees recognizing the heroic virtues of three men and five women, including:
— Father Thomas Choe Yang-eop, a Korean priest who died in 1861. Known as the "martyr of sweat," he traveled more than 2,500 miles every year and listened to some 4,000 confessions.
— Father Sosio Del Prete, an Italian Franciscan priest and founder of the Little Servants of Christ the King.
— Father Walenty Katarzyniec, a Polish Franciscan priest who died in 1921.
— Mother Emilia Pasqualina Addatis, the Italian founder of the Congregation of Mother of Sorrows Servants of Mary.
— Mother Caterina Carrasco Tenorio, a Spanish nun and founder of the Franciscan Sisters of the Flock of Mary. She died in 1917.
— Mother Laura Baraggia, an Italian nun born in 1851 who founded the Sisters of the Family of the Sacred Heart of Jesus.
— Mother Ilia Corsaro, an Italian nun and foundress of the Little Missionaries of the Eucharist. She died in 1977.
— Maria Montserrat Grases Garcia, a Spanish laywoman and member of Opus Dei who died in 1959 at the age of 17.
Copyright © 2023 Catholic News Service, Inc. All rights reserved. Linking is encouraged, but republishing or redistributing, including by framing or similar means, without the publisher's prior written permission is prohibited.