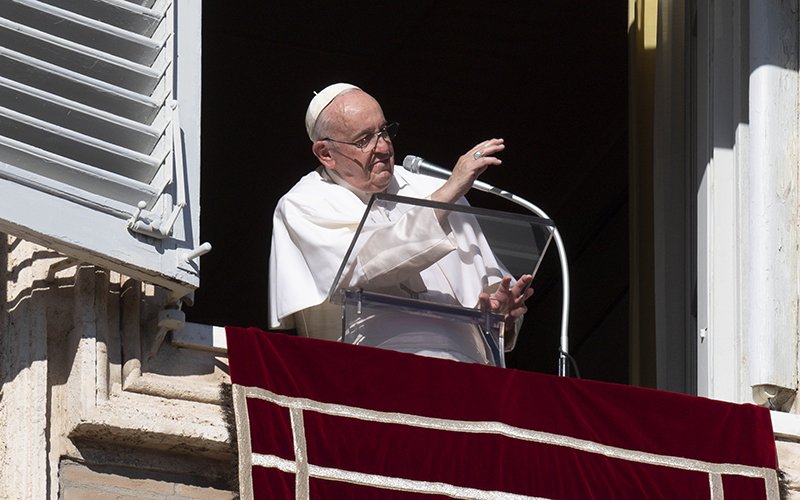 Pope Francis waves to the crowd as he leads the Angelus from the window of his studio overlooking St. Peter's Square at the Vatican Nov. 27, 2022. (CNS photo by Vatican Media)

VATICAN CITY (CNS) — Being so distracted that one does not notice God’s presence in daily life is a warning sign that one is not being vigilant enough, Pope Francis cautioned.

Vigilance during Advent is key, Pope Francis said, because Jesus “warns us: there is the danger of not realizing his coming and being unprepared for his visit.”

Speaking to pilgrims gathered in St. Peter’s Square for the recitation of the Angelus prayer on the first Sunday of Advent, Nov. 27, Pope Francis urged Christians to be watchful for the signs of God’s presence in ordinary life.

“God is hidden in our life,” Pope Francis explained; “he is concealed in the most common and most ordinary situations in our life.”

The watchful spirit of Advent

The pope contrasted the watchful spirit of Advent with the attitude common in the “days of Noah,” when people went about their daily activities without paying attention to God’s voice in their lives.

“People in the time of Noah ate and drank and ‘did not know until the flood came and swept them all away,'” Pope Francis said, quoting the day’s Gospel reading from St. Matthew. “They were absorbed in their own things and did not realize that the flood was about to come.”

The truth is that God is present “in our daily work, in a chance encounter, in the face of someone in need,” Pope Francis said. “Even when we face days that seem grey and monotonous, it is right there that we find the Lord, who calls to us, speaks to us and inspires our actions.”

Be ready this Advent

During Advent, Pope Francis said, “Let us be shaken out of our torpor and let us awaken from slumber!”

To help the process, he suggested people ask themselves, “‘Am I aware of what I am doing? Am I alert? Am I awake?'”

Doing this, the pope explained, people will be ready not only to celebrate Christmas, but their souls will be ready when Christ comes again at the end of the world.

“If we are unaware of his coming today, we will also be unprepared when he arrives at the end of time,” the pope said.