Pope: Alliance between young and old must be renewed - Catholic Courier 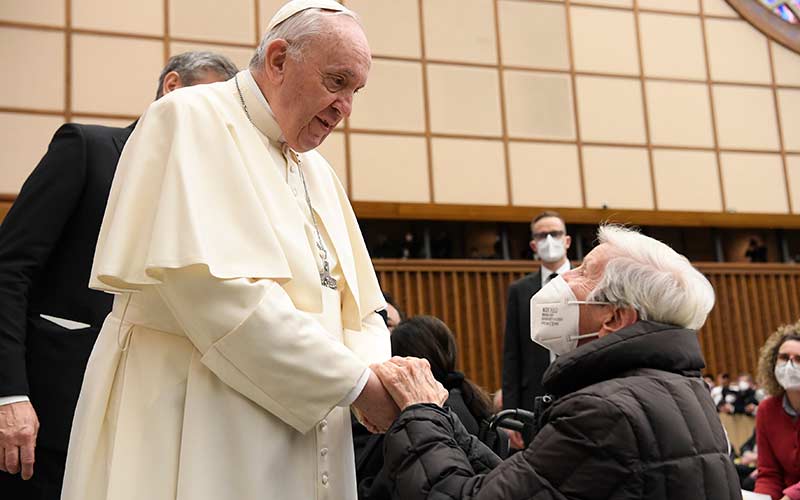 Pope Francis greets a woman during his general audience in the Paul VI hall at the Vatican Feb. 23, 2022. (CNS photo by Paul Haring)

VATICAN CITY (CNS) — The elderly, who are often cast aside, are a treasure trove of wisdom that can help one discover the true meaning of life rather than be consumed by the unrealistic goal of remaining forever young, Pope Francis said.

“Youth is beautiful, but eternal youth is a very dangerous illusion,” the pope said Feb. 23 during his Wednesday general audience.

“Being old is just as important — and beautiful — as being young. Let us remember this. The alliance between generations, which restores all ages of life to what is human, is our lost gift, and we must get it back. It must be found, in this culture of waste and in this culture of productivity,” he said.

The day’s audience talk was the first of a new series dedicated to the meaning and value of old age. Noting that “there have never been so many of us in human history,” the 85-year-old pope said that now more than ever, the elderly face an increasing “risk of being discarded.”

“The elderly are often seen as ‘a burden,'” he said. “In the dramatic first phase of the pandemic, it was they who paid the highest price. They were already the weakest and most neglected group: we did not look at them too much when they were alive, we did not even see them die.”

The pope said that although the current demographic winter has led to a higher number of elderly than young people, the “dominant culture has as its sole model the young adult, that is, a self-made individual who always remains young.”

“The exaltation of youth as the only age worthy of embodying the human ideal, coupled with contempt for old age as frailty, decay, disability, has been the dominant image of 20th-century totalitarianism. Have we forgotten this?” he asked.

Instead of being “honored for the gifts they bring to everyone’s sense of life,” the pope said, old age, especially “in so-called ‘developed’ cultures,” is often disregarded “as an age that has no special content to offer, nor meaning of its own to live.”

Pope Francis warned that the world will be robbed of love if “old age is not restored to the dignity of humanly worthy life,” and he encouraged Christians “to invest their thoughts and affections in the gifts” old age brings to one’s life.

“Everything beautiful that a society has is related to the roots of the elderly,” the pope said. “For this reason, in these catecheses, I would like to highlight the figure of the elderly person, so people would understand the elderly are not something to be discarded; they are a blessing for society.”