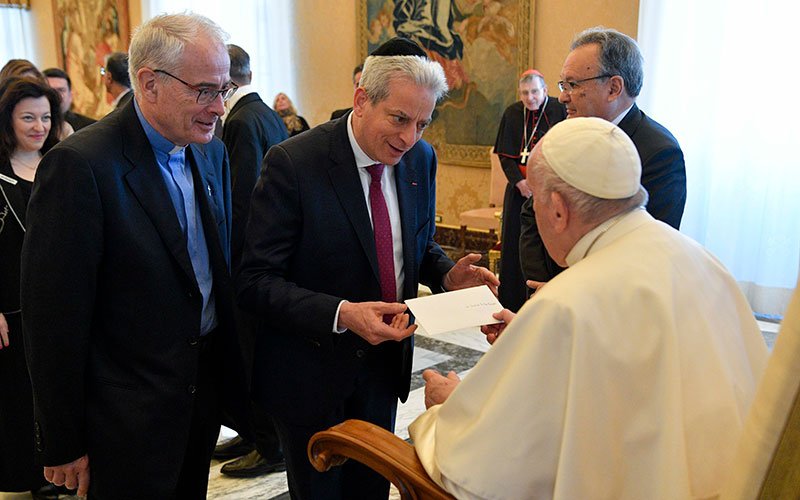 Pope Francis accepts a letter during an audience with members of Amitié Judéo-Chrétienne de France, a Jewish-Christian dialogue organization founded in France in 1948, at the Vatican Dec. 12, 2022. (CNS photo by Vatican Media)

VATICAN CITY (CNS) — Decrying what he described as “hostile times” when antisemitism and violence against Christians are on the rise, Pope Francis said a renewed commitment to Catholic-Jewish dialogue is needed.

“The path we have traveled together is considerable,” but the work clearly is not done, the pope told members of the Amitié Judéo-Chrétienne de France, a dialogue and education group founded in 1948 by Jules Isaac, a French historian who worked to improve Christian-Jewish relations after World War II and met with Popes Pius XII and John XXIII.

“We must give thanks to God” for the progress, the pope said, especially “given the weight of mutual prejudices and the sometimes-painful history that must be acknowledged.”

“The task is not finished, and I encourage you to persevere on the path of dialogue, fraternity and joint initiatives,” the pope said. “This beautiful work, which consists in creating bonds, is fragile, always to be resumed and consolidated, especially in these hostile times in which attitudes of closure and rejection of the other are becoming more numerous, including with the worrying reappearance of antisemitism, particularly in Europe, and of violence against Christians.”

Pope Francis praised Isaac and, particularly, his work at the 1947 Seelisberg Conference of the International Council of Christians and Jews, which came up with a 10-point list of facts Christians must keep in mind when speaking with or about their Jewish brothers and sisters. They begin with the affirmation that there is one God who “speaks to us all through the Old and the New Testaments” and with the fact that Jesus, his mother and his disciples all were Jews.

Many of the points later were incorporated into the Second Vatican Council document “Nostra Aetate” on relations with the Jews, Muslims and other non-Christians, Pope Francis noted.

Thanking the French group for its “untiring” work, the pope said members had helped “Jews and Christians rediscover themselves as brothers and sisters, children of the same father.”

Tags: Antisemitism, Pope Francis
Copyright © 2023 Catholic News Service, Inc. All rights reserved. Linking is encouraged, but republishing or redistributing, including by framing or similar means, without the publisher's prior written permission is prohibited.