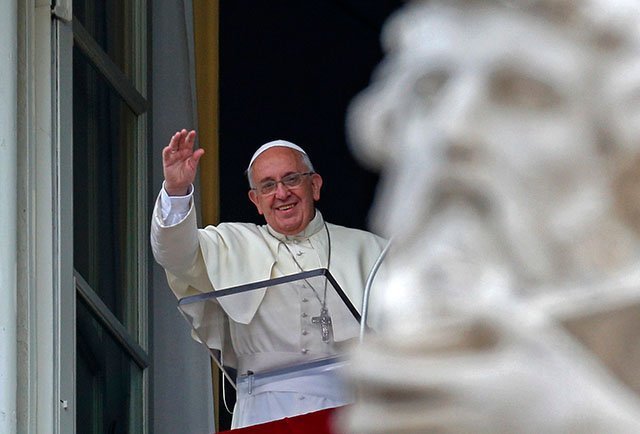 Pope Francis waves as he leads the Angelus from the window of the Apostolic Palace in St. Peter's Square at the Vatican June 15. The pope expressed his fears over increasing violence in Iraq and prayed for peace, security and reconciliation in the country.

VATICAN CITY (CNS) — Pope Francis expressed his fears over increasing violence in Iraq and prayed for peace, security and reconciliation in the country.

He also announced he would be visiting Albania Sept. 21 to encourage the Catholic minority there and the people "who long suffered as a result of the ideologies of the past."

The one-day visit to Tirana will be Pope Francis’ first papal visit to a European nation and a nation where all religious practice was banned from 1967 to 1990. Persecution of the church, especially the clergy, had become the norm when the Communist Party took control of the government in 1944.

The pope made his announcement after praying the Angelus with those gathered in St. Peter’s Square June 15.

He said he was following the news of increasing violence in Iraq "with deep concern."

"I invite all of you to join me in prayer for the dear Iraqi nation, above all for the victims and for those who are suffering the consequences of the growing violence, most especially the many people, including many Christians, who had to leave their homes," he said.

Pope Francis added that he hoped the whole country could enjoy "security, peace and a future of reconciliation and justice, where all Iraqis, whatever their religion, could build their nation together, creating a model of coexistence."

The United Nations estimated 1 million Iraqis have become internally displaced because of a recent upsurge in sectarian violence and the recent fall of Mosul, Iraq’s second-largest city, to Islamist militants.

Chaldean Patriarch Louis Sako of Baghdad, who was visiting Chaldean communities in North America, called for a day of fasting and prayer June 18.

He told the Vatican’s Fides news agency June 16 that the Synod of the Chaldean Church would still take place, but that instead of being held in Baghdad as originally planned, the June 24-28 meeting would be held in Kurdish-controlled Ankawa, near Irbil.

Chaldean Father Kais Mumtaz of Kirkuk told Fides June 14 that the situation unfolding in Iraq suggests that "everything seems to be leading toward only a military management" of the crisis.

He said the threat of civil war "scares many Christians even more than the advance of the Islamists: The war makes no distinction between soldiers, terrorists and civilians. It strikes Christians, Sunnis, Kurds and Shiites in the same way."