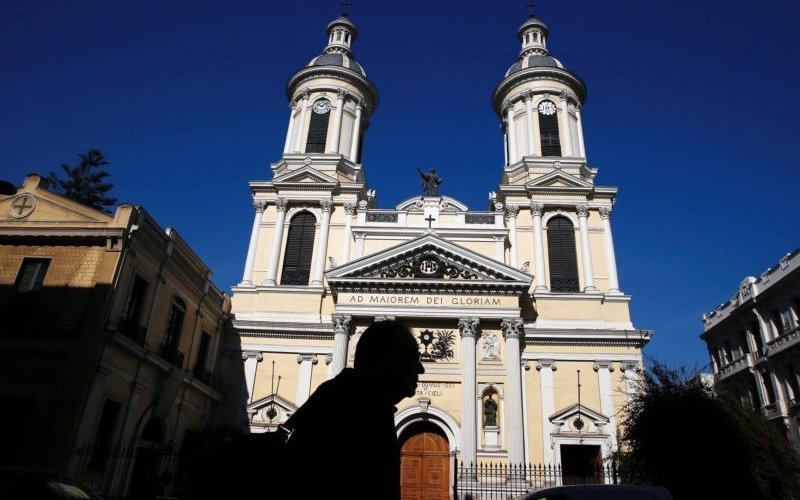 A man is silhouetted in front of St. Ignatius of Loyola Church in Santiago, Chile June 13, 2018. (CNS photo by Rodrigo Garrido/Reuters)

VATICAN CITY (CNS) — A specialized center at Chile’s premier Catholic university can help the Catholic Church protect minors and vulnerable persons from the scourge of clerical sexual abuse, which has plagued the Catholic Church in the country and around the world, Pope Francis said.

In a video message played Aug. 15 during the inaugural ceremony of the Center for Investigation of Abuse and Early Prevention at the Pontifical Catholic University of Chile, the pope praised the center’s aim to “not only take charge of various problems, of prevention and of abuse, but also of investigation, of looking for policies to continue saving minors from every form of abuse, every form of manipulation that in some way destroys their heart.”

According to its website, the center, which is also known by its acronym “CUIDA” (“CARE”), “seeks to identify the structural, cultural, social and family aspects that allow abuse in childhood and adolescence, as well as those aspects that promote the protection of children and reparation of harm.”

CUIDA was formed as a collaboration between the Pontifical Catholic University of Chile and the “Para la Confianza” foundation, an organization dedicated to abuse prevention founded in 2010 by James Hamilton, Juan Carlos Cruz and Jose Andres Murillo, survivors of abuse at the hands of then-Father Fernando Karadima, who was expelled from the priesthood by Pope Francis in 2018.

The pope met with all three survivors in May 2018, several weeks after writing a letter in which he said he had been mistaken in his initial assessment of the situation in Chile and asking forgiveness of the survivors and others he offended.

Hamilton, Cruz and Murillo were present at the center’s inauguration along with Bishop Celestino Aos Braco of Copiapo, Chile, apostolic administrator of the Archdiocese of Santiago.

The pope expressed his gratitude to those who “developed and worked” to create the new center and also thanked Bishop Aos for his “paternal ability to welcome and carry forward these kinds of projects.”

According to Chilean newspaper, El Mercurio, Murillo, who is the executive director of “Para la Confianza,” said that while his organization and the Pontifical Catholic University of Chile may seem like “unlikely allies,” the establishment of the center was the next logical step in the fight against sexual abuse.

“We are motivated by a greater good,” he said. When it comes to the “protection of boys, girls and adolescents, we cannot think that only one has the truth about the problem.”