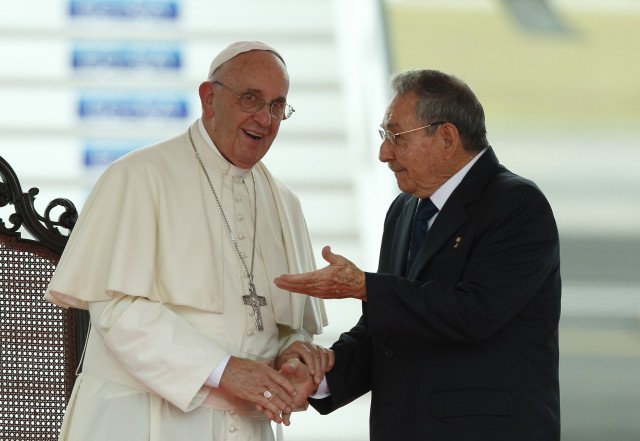 HAVANA (CNS) — Pope Francis began his visit to Cuba praying for greater freedom for the island’s people and calling on U.S. and Cuban politicians to continue moving toward fully normal and neighborly relations.

Meeting President Raul Castro and speaking before a small crowd at Havana’s Jose Marti International Airport Sept. 19, Pope Francis said the Cuban-U.S. rapprochement announced in December is "an event which fills us with hope" after decades of tensions and a 55-year-old economic embargo against Cuba.

The new U.S.-Cuban relationship, which leaders of both countries said the pope had a role in facilitating, are "a sign of the victory of the culture of encounter and dialogue," Pope Francis said.

"I urge political leaders to persevere on this path and to develop all its potentialities as a proof of the high service which they are called to carry out on behalf of the peace and well-being of their peoples, of all America, and as an example of reconciliation for the entire world," the pope said.

Briefly straying from his prepared text, the pope said, "Our world needs this reconciliation at this time of the ‘third world war,’ which is being fought in stages," with multiple small conflicts going on simultaneously.

Castro told the pope that the full normalization of relations with the United States "will demand resolving problems and correcting injustices."

The economic embargo, established by the United States in 1960, "is cruel, immoral and illegal, and it should cease," Castro said. He also insisted the U.S. return the land on which the U.S. Naval Base at Guantanamo Bay is constructed.

Highlighting the 80th anniversary of Vatican-Cuban diplomatic relations and the visits of St. John Paul II in 1998 and Pope Benedict XVI in 2012, Pope Francis also encouraged the Cuban government to continue giving greater freedom to the Catholic Church in the communist country.

"Today we renew those bonds of cooperation and friendship, so that the church can continue to support and encourage the Cuban people in their hopes and concerns, with the freedom, means and space needed" to proclaim the Gospel, especially to people on the margins of society.

St. John Paul’s historic visit was hosted in part by Raul Castro’s brother Fidel, who led the country for more than 45 years. When Pope Benedict visited the country 14 years later, he made a point of visiting with the ailing Fidel.

At the airport welcoming ceremony, Pope Francis publicly asked the president "to convey my sentiments of particular respect and consideration to your brother Fidel." Although no date or time was announced, Pope Francis also was expected to meet with Fidel Castro.

The Cuban church described Pope Francis as a "missionary of mercy" to Cuba, where he was scheduled to stay until flying to the United States Sept. 22. In addition to Havana, the pope also was to visit Holguin and Santiago de Cuba with its nearby shrine of Our Lady of Charity of El Cobre.

Our Lady of Charity, he said, "has accompanied the history of the Cuba people, sustaining the hope which preserves people’s dignity in the most difficult situations and championing the promotion of all that gives dignity to the human person."

The pope said he would be visiting the shrine "as a son and a pilgrim to pray to our Mother for all her Cuban children and for this beloved nation, that it may travel the paths of justice, peace, liberty and reconciliation."

Shortly after his Alitalia plane took off from Rome’s Fiumicino airport for the 11-hour flight to Havana, Pope Francis walked to the back of the plane to greet the 76 members of the media traveling with him to both Cuba and the United States.

Peace was on his mind as he set off from Rome, he said.

Just before leaving the Vatican, he said, he met the Syrian family of refugees being hosted by the Vatican’s St. Anne’s parish.

"Today the world is thirsting for peace," the pope told reporters. "There are wars, there are migrants who are fleeing, this wave of migration that comes from wars, fleeing death and seeking life."

"I was moved and became very emotional" meeting the family, he said. "You could see the pain in their faces."

Pope Francis thanked the journalists "for all you do in your work to build bridges, small bridges of peace, because each bridge, each little bridge, one after the other, makes a big bridge of peace."

The pope also said he knew the Sept. 19-28 trip would be challenging professionally for the media.