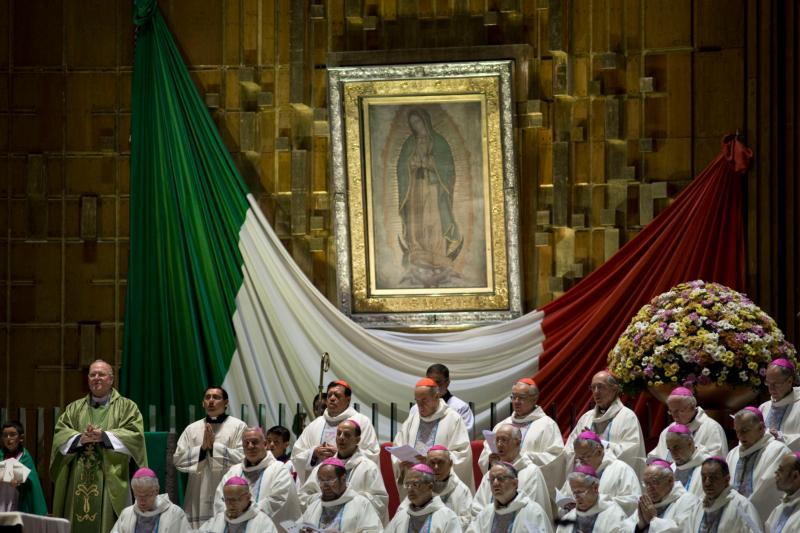 New York Cardinal Timothy M. Dolan, left, celebrates Mass in 2013 alongside other prelates at the Basilica of Our Lady of Guadalupe in Mexico City. In a video message one week before his apostolic visit, Pope Francis asked the people of Mexico for some time alone during his visit to pray before the image of Our Lady of Guadalupe.

VATICAN CITY (CNS) — In a video message one week before his apostolic visit, Pope Francis asked the people of Mexico for some time alone during his visit to pray before the image of Our Lady of Guadalupe.

"I would like to ask — as a favor from you — that this time, which will be the third time I will step on Mexican soil, to leave me alone a few minutes in front of the image. That is the favor I ask. Can you do that for me?" he said in the video released Jan. 3 by the Mexican news agency NotiMex.

The video featured men and women from different cities in Mexico asking the pope questions about the visit he has planned to their country Feb. 12-17.

"I’m going to Mexico not as a wise man bearing things, messages, ideas or solutions to problems," he responded, but as a pilgrim in search of something from the Mexican people.

"I am not going to pass around the collection basket so don’t worry about that," the pope said. "But I will seek the wealth of faith that you have; I want to come in contact with that wealth of faith."

Their wealth, he said, comes from the fact that they are not an orphaned people but one with a mother who "forged hope" in them.

"You all know the joke of that Mexican man who would say, ‘I am an atheist, but I am Guadalupan.’ It makes sense," he said, because it reflects the feeling of "a people who does not want to be orphaned. There, perhaps, is the great wealth that I will seek. I will go as a pilgrim."

When asked about his thoughts about Our Lady of Guadalupe, the pope recalled his visits to Mexico in 1970 and 1998, adding that "safety" and "tenderness" are what come to mind when thinking of Mary.

"How many times I have been fearful of a problem or that something bad has happened and I don’t know how to react and I pray to her. I like to repeat to myself, ‘Do not be afraid; Am I not here, I, who am your mother?’" The words are those Mary said to Juan Diego when she appeared to him.

Pope Francis also said he will visit as a "servant of faith" for the people, in the hopes that the faith may flourish in their private and public lives.