Pope at Christmas: ‘God comes into the world in littleness’ - Catholic Courier 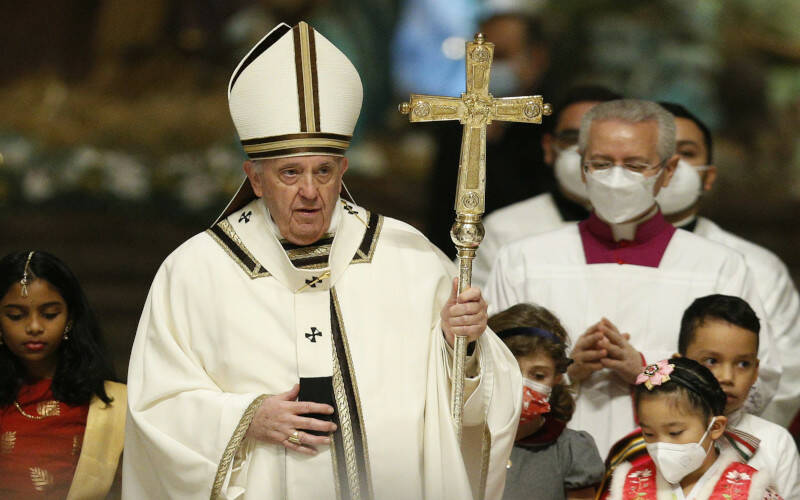 Pope Francis walks with children after visiting the Nativity scene at the conclusion of Christmas Eve Mass in St. Peter’s Basilica at the Vatican Dec. 24. (CNS photo by Paul Haring)

The celebration of Christmas serves as a reminder that God did not reveal his greatness in a grand spectacle, but rather in the “littleness” of a poor, vulnerable child born in a stable in Bethlehem, Pope Francis said.

“Let us be amazed by this scandalous truth,” the pope said in his homily Dec. 24 as he celebrated the nighttime liturgy.

“The one who embraces the universe needs to be held in another’s arms. The one who created the sun needs to be warmed. Tenderness incarnate needs to be coddled. Infinite love has a tiny heart that beats softly,” he said.

The nighttime Mass, which is often referred to as “midnight Mass,” has not been celebrated at midnight at the Vatican since 2009. However, while Italy no longer has a 10 p.m. curfew in force as part of its measures to stem the spread of COVID-19, Pope Francis celebrated the “Christmas Mass at Night” at 7:30 p.m., as he did in 2020.

The pope made his way toward the main altar, processing with hundreds of concelebrants as the sounds of the Christmas hymn, “Noel,” echoed in the basilica.

After the procession, the Mass began with the Christmas proclamation, or “kalenda,” of Jesus’ birth. The pope then lifted a cloth, revealing a life-sized statue of baby Jesus, which he reverently kissed and blessed with incense.

As the bells of St. Peter’s Basilica rang loudly announcing the birth of Christ, several children made their way to the statue of baby Jesus, placing white flowers around the crib.

In his homily, the pope began by reflecting on the angel’s announcement of Christ’s birth to shepherds and that the sign they were given was to look for “a child, a baby lying in the dire poverty of a manger.”

Notably, he said, the Gospel reading begins by presenting “the first emperor in all his grandeur,” Caesar Augustus, who ordered a census of the whole world. It then immediately recounts the birth of Jesus who was “wrapped in swaddling clothes, with shepherds standing by.”

“That is where God is, in littleness. This is the message: God does not rise up in grandeur, but lowers himself into littleness. Littleness is the path that he chose to draw near to us, to touch our hearts, to save us and to bring us back to what really matters,” the pope said.

Pope Francis urged Christians to reflect on how God came into the world and ask themselves if they can “accept God’s way of doing things.” While some “continue to seek grandeur, even in his name,” God “does not seek power and might; he asks for tender love and interior littleness.”

“This is what we should ask Jesus for at Christmas: the grace of littleness,” the pope said. “Jesus asks us to rediscover and value the little things in life. If he is present there, what else do we need? Let us stop pining for a grandeur that is not ours to have. Let us put aside our complaints and our gloomy faces and the greed that never satisfies!”

Continuing his homily, the pope also encouraged those who feel overwhelmed “by the darkness of night” and surrounded “by cold indifference” that can make them feel worthless and unloved.

“Tonight, God answers back,” he said. “Tonight, he tells you: ‘I love you just as you are. Your littleness does not frighten me, your failings do not trouble me. I became little for your sake. To be your God, I became your brother.’”

He also said that accepting the grace of littleness also means embracing Jesus in the poor and less fortunate because they are the “most like Jesus, who was born in poverty.”

The poor, he continued, are not only the ones chosen by God to be present at the birth of his son, but who also lived near Christ’s birthplace.

“That is where Jesus is born,” the pope said. He “is close to them, close to the forgotten ones of the peripheries. He comes where human dignity is put to the test. He comes to ennoble the excluded, and he first reveals himself to them: not to educated and important people, but to poor working people.”

However, he noted, not only the poor were present but also the rich, personified in the presence of the Magi.

“In Bethlehem, rich and poor come together, those who worship, like the Magi, and those who work, like the shepherds. Everything is unified when Jesus is at the center: not our ideas about Jesus, but Jesus himself, the living one,” he said.

Pope Francis called on Christians to return to the origins of faith where “the shepherds and Magi are joined in a fraternity beyond all labels and classifications.”

“Let us look at the Magi who make their pilgrim way, and as a synodal church, a journeying church, let us go to Bethlehem, where God is in man and man in God,” the pope said.

“May God enable us to be a worshipping, poor and fraternal church. That is what is essential. Let us go back to Bethlehem,” he said.