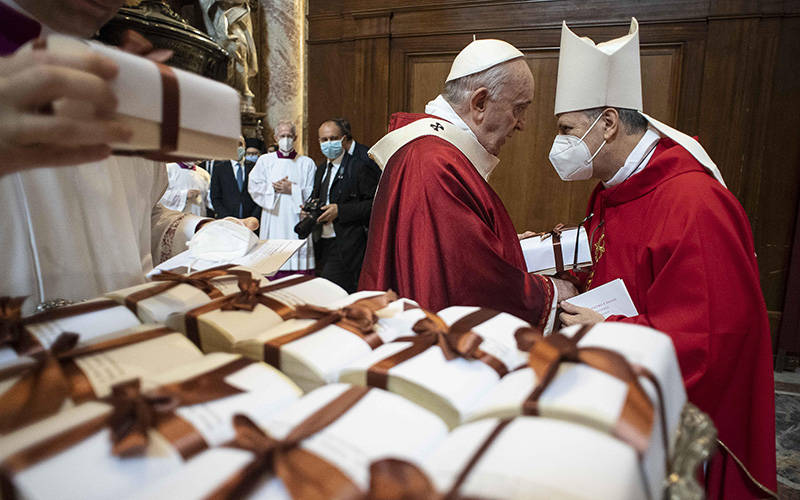 Pope Francis distributes palliums after celebrating Mass on the feast of Sts. Peter and Paul in St. Peter’s Basilica at the Vatican June 29, 2021. (CNS photo by Vatican Media)

VATICAN CITY (CNS) — Sts. Peter and Paul were great not just because of their zeal for the Gospel, but because they allowed Christ to enter their hearts and change their lives, Pope Francis said.

“The church looks to these two giants of faith and sees two apostles who set free the power of the Gospel in our world, but only because first they themselves had been set free by their encounter with Christ,” the pope said during his homily at Mass for the feast of Sts. Peter and Paul June 29.

The feast day celebration in St. Peter’s Basilica included the traditional blessing of the pallium, the woolen band that the heads of archdioceses wear around their shoulders over their Mass vestments.

The pallium symbolizes an archbishop’s unity with the pope and his authority and responsibility to care for the flock the pope entrusted to him. The pope blessed the palliums after they were brought up from the crypt above the tomb of St. Peter.

According to the Vatican, 34 archbishops from 18 countries who were named over the past 12 months were to receive the palliums, including: Canadian Archbishops Brian J. Dunn of Halifax-Yarmouth and Marcel Damphousse of Ottawa-Cornwall; Filipino Cardinal Jose Advincula of Manila and Irish Archbishop Dermot P. Farrell of Dublin.

“This sign of unity with Peter recalls the mission of the shepherd who gives his life for the flock,” the pope told the archbishops before concluding his homily. “It is in giving his life that the shepherd, himself set free, becomes a means of bringing freedom to his brothers and sisters.”

Keeping with a long tradition, a delegation from the Ecumenical Patriarchate of Constantinople was present for the Mass and, afterward, went with Pope Francis down the stairs below the main altar to pray at St. Peter’s tomb.

In his homily, the pope reflected on the lives of Sts. Peter and Paul, the “two pillars of the church” who, after experiencing God’s love in their lives, “became apostles and ministers of freedom for others.”

Because of Jesus’ unconditional love, Peter was set free “from his sense of inadequacy and his bitter experience of failure,” the pope explained. While Peter “often yielded to fear,” Jesus “was willing to take a risk on him” and encouraged him to not give up.

“In this way, Jesus set Peter free from fear, from calculations based solely on worldly concerns,” the pope said. “He gave him the courage to risk everything and the joy of becoming a fisher of men. It was Peter whom Jesus called to strengthen his brothers in faith.”

On the other hand, the pope continued, Paul experienced a different kind of freedom “from the most oppressive form of slavery, which is slavery to self.”

Christ also freed Paul “from the religious fervor that had made him a zealous defender of his ancestral traditions and a cruel persecutor of Christians,” he added.

“Formal religious observance and the intransigent defense of tradition, rather than making him open to the love of God and of his brothers and sisters, had hardened him,” the pope said.

God, however, did not spare Paul from “frailties and hardships,” such as illness, violence and persecution during his missions, thus revealing to the apostle that “God chose what is weak in the world to shame the strong,” he said.

Pope Francis encouraged Christians to be free from fear like Peter and, like Paul, to be free “from the temptation to present ourselves with worldly power rather than with the weakness that makes space for God” and “free from a religiosity that makes us rigid and inflexible.”

“Peter and Paul bequeath to us the image of a church entrusted to our hands, yet guided by the Lord with fidelity and tender love,” the pope said.

“A church that is weak, yet finds strength in the presence of God. A church set free and capable of offering the world the freedom that the world by itself cannot give: freedom from sin and death, from resignation, and from the sense of injustice and the loss of hope that dehumanizes the lives of the women and men of our time,” he said.