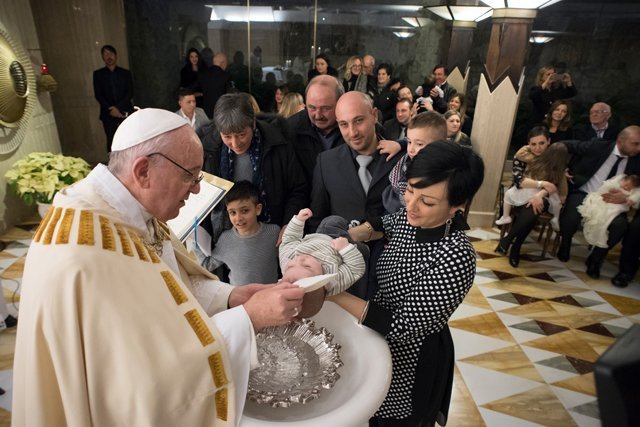 Pope Francis celebrates the baptism of 13 babies from earthquake zones in Italy in the chapel of the Domus Sanctae Marthae at the Vatican Jan. 14.
By Junno Arocho Esteves
Catholic News Service
VATICAN CITY (CNS) — In a gesture of closeness to those who lost loved ones and homes following several devastating earthquakes, Pope Francis baptized 13 babies from central Italy.
The pope celebrated the sacrament of baptism Jan. 14 in a private ceremony in the chapel of the Domus Sanctae Marthae, where he lives.
The Vatican said that all of  the babies baptized by the pope were born after last year’s earthquakes and that "the youngest of the babies was 5 days old."
The central Italian region — particularly the towns of Amatrice, Rieti, Accumoli, and Pescara del Tronto — were rocked by a 6.2 magnitude quake Aug. 24, 2016.
Amatrice was the hardest-hit town, accounting for 234 of the estimated 290 deaths, according to the Italian Civil Protection office.
Pope Francis visited the hardest-hit areas Oct. 4 and then a powerful 6.5 magnitude earthquake struck Norcia in the early morning Oct. 30, reducing the Basilica of St. Benedict to rubble.
Meeting with youths from the parish of St. Mary in the Setteville neighborhood on the eastern edge of Rome Jan. 15, the pope said he had baptized the child of a man who lost his wife in the earthquake.
"’I lost my love,’ he told me," the pope said. "One may think: How can this man have faith after this tragedy?"
Asked by a young girl how not to lose faith amid life’s ups and downs, the pope said that experiences of calamity — like the experience of the baby’s father — can make it seem that one’s faith is lost in "darkness."
However, he added, Christians must "respect this darkness of the soul" they see others experiencing, steadily standing alongside them in silence, but offering support and a readiness to help those who find it difficult to embrace the faith after experiencing tragedy.
"It will be the Lord who will reawaken faith," the pope said. "Faith is a gift from the Lord. We must only guard it. You do not study to have faith; faith is received like a gift."
– – –
Follow Arocho on Twitter: @arochoju.
Copyright © 2022 Catholic News Service, Inc. All rights reserved. Linking is encouraged, but republishing or redistributing, including by framing or similar means, without the publisher's prior written permission is prohibited.