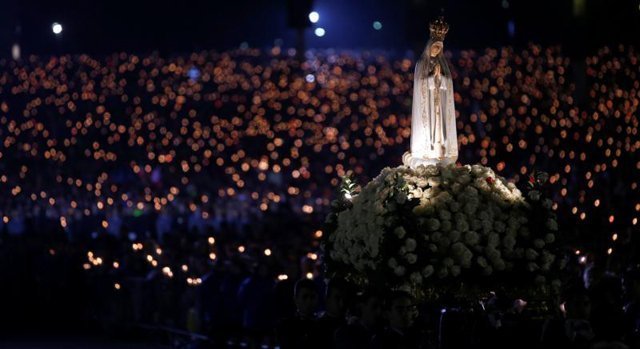 A statue of Our Lady of Fatima is carried through the crowd May 12 at the Marian shrine of Fatima in central Portugal. Thousands of pilgrims arrived at the shrine to attend the 99th anniversary of the first apparition of Mary to three shepherd children. Lucia dos Santos and her cousins, Francisco and Jacinta Marto, received the first of several visions May 13, 1917.

VATICAN CITY (CNS) — Sixteen years after the Vatican released the text of the so-called Third Secret of Fatima, rumors cyclically arise claiming that the Vatican still is keeping part of Mary’s message to three children in Fatima, Portugal, secret.

The Vatican press office May 21 took the unusual step of publishing a communique with reaction from retired Pope Benedict XVI, who — as prefect of the Congregation for the Doctrine of the Faith — oversaw the secret’s publication in 2000 and personally wrote a commentary on it. He insisted at the time that the complete text had been published.

In mid-May, a blog published a story claiming a German priest, Father Ingo Dollinger, said that then-Cardinal Joseph Ratzinger had told him soon after the publication in 2000 that part of the message was still secret.

The Vatican communique said: "In this regard, Pope emeritus Benedict XVI declares ‘never to have spoken with Professor Dollinger about Fatima,’ clearly affirming that the remarks attributed to Professor Dollinger on the matter ‘are pure inventions, absolutely untrue,’ and he confirms decisively that ‘the publication of the Third Secret of Fatima is complete.’"