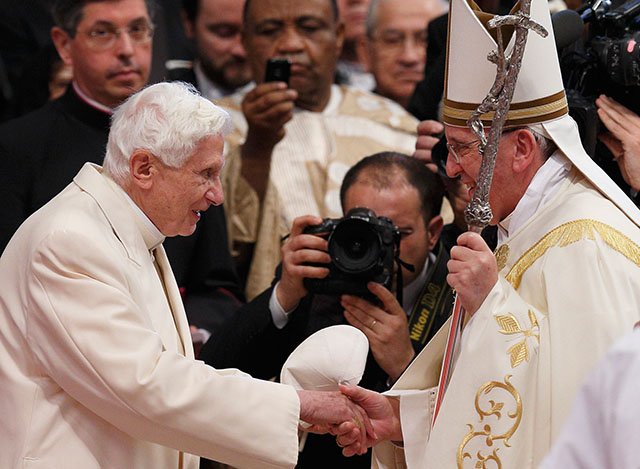 Retired Pope Benedict XVI greets Pope Francis at the conclusion of a consistory at which Pope Francis created 19 new cardinals in St. Peter's Basilica at the Vatican Feb. 22. Pope Benedict's presence at the ceremony marked the first time he had joined Pope Francis for a public liturgy.

VATICAN CITY (CNS) — In a letter to an Italian journalist, retired Pope Benedict XVI said questions about the validity of his resignation are "absurd."

"There is absolutely no doubt regarding the validity of my renunciation of the Petrine ministry," the retired pope wrote in a letter to Andrea Tornielli, a Vatican correspondent for the newspaper La Stampa and the website Vatican Insider.

Tornielli said he wrote to the retired pope Feb. 14 after reading articles questioning the canonical validity of his announcement Feb. 11, 2013, that he was stepping down.

In the letter, Pope Benedict described as "simply absurd" doubts about how he had formulated his announcement to cardinals gathered for a meeting about canonization causes.

According to the church’s Code of Canon Law, "the only condition for validity of my resignation is the complete freedom of my decision," he wrote to Tornielli.

Solemnly, in Latin, Pope Benedict had told the cardinals present: "Well aware of the seriousness of this act, with full freedom I declare that I renounce the ministry of Bishop of Rome, Successor of St. Peter, entrusted to me by the cardinals on 19 April 2005, in such a way, that as from 28 February 2013, at 20:00 hours, the See of Rome, the See of St. Peter, will be vacant and a conclave to elect the new supreme pontiff will have to be convoked by those whose competence it is."

Tornielli also had asked Pope Benedict why he continues wearing a white cassock — a simplified version of what he wore as pope — and why he did not go back to using his given name, Joseph Ratzinger.

"I continue to wear the white cassock and kept the name Benedict for purely practical reasons," he said. "At the moment of my resignation, there were no other clothes available. In any case, I wear the white cassock in a visibly different way to how the pope wears it. This is another case of completely unfounded speculations being made."

The retired pope said his only task in the church today is to support Pope Francis with his prayers.