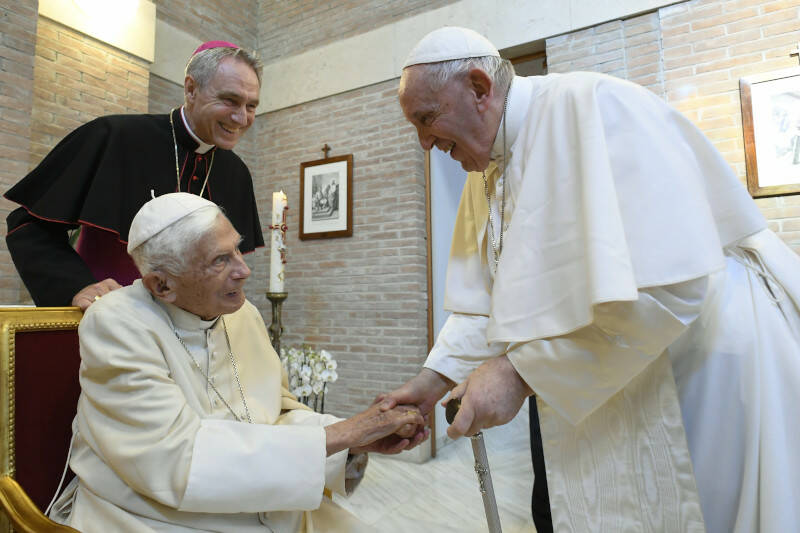 Pope Francis greets retired Pope Benedict XVI at the Mater Ecclesiae monastery after a consistory for the creation of 20 new cardinals in St. Peter’s Basilica at the Vatican Aug. 27, 2022. Looking on is Archbishop Georg Gänswein, the retired pope’s private secretary. (CNS photo by Vatican Media)

VATICAN CITY (CNS) — Two days after Pope Francis told people retired Pope Benedict was “very sick” and in need of prayers, the Vatican said he again had had a restful night and was able to participate in the celebration of Mass in his room.

“Last night the pope emeritus was able to rest well,” Matteo Bruni, director of the Vatican press office, said in a note Dec. 30. “He also participated in the celebration of holy Mass in his room yesterday afternoon.”

“At present his condition is stationary,” said Bruni, who 24 hours earlier said the 95-year-old retired pope was in serious, but stable condition.

At his Dec. 28 general audience, Pope Francis asked for prayers for Pope Benedict

Pope Francis raised alarms Dec. 28 when he asked people at his general audience to say special prayers for his predecessor.

Pope Benedict “is sustaining the church in silence,” Pope Francis had said. “Remember him. He is very sick.”

“Ask the Lord to console him and sustain him in his witness of love for the church until the very end,” Pope Francis said.

Bruni told reporters that Pope Francis went to Pope Benedict’s residence after the audience to visit him.

“I can confirm that in the last few hours there has been a worsening (of Pope Benedict’s health) due to advancing age,” Bruni had said Dec. 28. “The situation at the moment remains under control, constantly followed by doctors.”

On Dec. 29, Pope Benedict was said to be lucid, alert and had rested well

In a statement to reporters the next day, Bruni said the retired pope had rested well overnight and “is absolutely lucid and alert.”

“Although his condition remains serious,” Bruni said, as of midday Dec. 29 he was stable.

“Pope Francis renews his invitation to pray for him and accompany him in these difficult hours,” Bruni added.