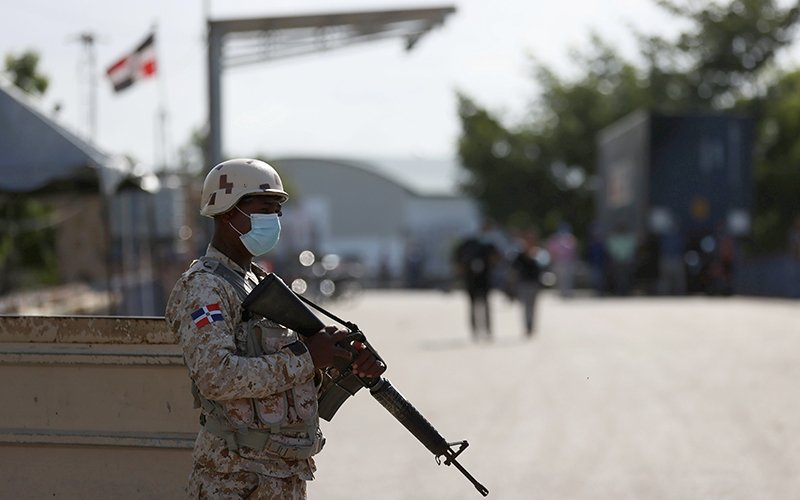 A Dominican soldier stands guard at the shared border between the Dominican Republic and Haiti in Dajabon, Dominican Republic, July 8, 2021. The border was closed following the July 7 assassination of Haitian President Jovenel Moïse. (CNS photo by Ricardo Rojas/Reuters)

VATICAN CITY (CNS) — Condemning the “heinous assassination” of Haitian President Jovenel Moïse, Pope Francis urged the people of Haiti to shun violence and make a commitment to dialogue and solidarity as the path to a better future.

In a telegram sent to the Vatican nunciature in Haiti after the July 7 killing of Moïse and the wounding of his wife, Martine Moïse, Cardinal Pietro Parolin, Vatican secretary of state, said the pope offered his condolences to all Haitians and was praying for the former first lady’s recovery.

“Praying to the Father of mercy for the repose of the soul of the deceased, the Holy Father expresses his sadness and condemns all forms of violence as a means of resolving crises and conflicts,” the telegram said. “He wishes for the dear Haitian people a future of fraternal harmony, solidarity and prosperity.”

The bishops of Haiti also released a statement condemning the assassination.

“Violence can only generate violence and leads to hatred,” said the statement, which was shared July 8 by Fides, the news agency of the Congregation for the Evangelization of Peoples.

Violence, they said, “will never help our country to get out of this political impasse, which can only be resolved through dialogue, consensus and the spirit of commitment to the best interests of the nation for the common good of the country.”

“The bishops’ conference invites all the sons and daughters of the country to overcome their personal pride and group interests to seek together, around a table,” a solution to the country’s woes in a way that is “dictated by love for Haiti and for our values as a people.”

On July 9, Archbishop José H. Gomez of Los Angeles, president of the U.S. Conference of Catholic Bishops, and Bishop David J. Malloy of Rockford, chairman of the USCCB’s Committee on International Justice and Peace, expressed “sadness and shock” over the assassination.

The attack “further compounds Haiti’s current political unrest and the multitude of challenges they face in the wake of natural disasters, hunger, failing economy, and gang violence that has made it one of the poorest countries in the Western Hemisphere,” the bishops said, adding that they joined Pope Francis and the church in Haiti in solidarity and prayers.

“We urge the United States government to continue to explore ways of effectively addressing the deeply rooted issues that prevent the country from emerging from its problems,” they added.

Haiti has been plagued by gang violence that some have said affected the poorest citizens. After the assassination, borders were closed, and the prime minister declared a state of siege.

International media reported July 8 that Haitian authorities reported they had arrested suspects in the assassination.