Pope: Bishops must be servants, not careerists - Catholic Courier 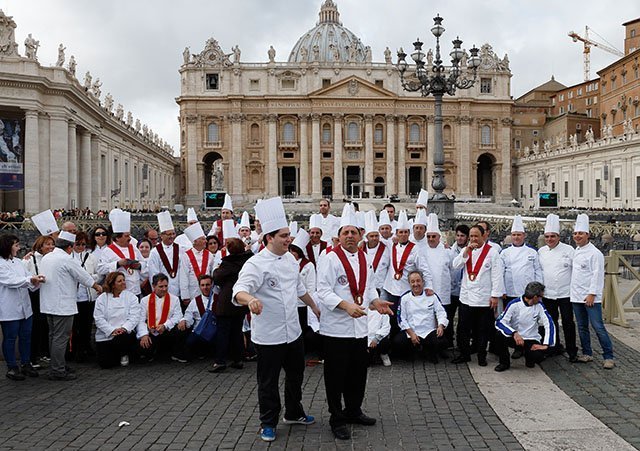 Cooks from the southern Italian region of Basilicata prepare to pose for a group photo after attending Pope Francis' general audience in St. Peter's Square at the Vatican Nov. 5.

VATICAN CITY (CNS) — The world’s bishops are called to be servants and shepherds who use their position to care for people and the faith, not to seek power and boost their pride, Pope Francis said.

The church has no place for men with a "worldly mentality" who are seeking a career, he said at his weekly general audience in St. Peter’s Square Nov. 5.

"It’s sad when you see a man who seeks this office and who does so much to get there and when he makes it, he doesn’t serve, but struts like a peacock, living only for his own vanity," the pope said.

The pope continued a series of talks on the nature of the church, focusing on the Holy Spirit’s gift of the ordained ministries, especially the role of the bishop.

The catechesis began with a reading from St. Paul’s Letter to Titus (1:5-9) in which the apostle lists the virtues the bishop must hold and the vices he must avoid, such as arrogance, irritability and greed.

"We all heard that, right?" the pope said, looking around him with a smile at the bishops who were attending the audience.

"It’s not easy" to live up to St. Paul’s advice "because we are sinners, but we trust in your prayers so at least we can move closer" to these ideals, he told the other pilgrims and visitors.

Through the church’s ordained ministers, "it is Christ who makes himself present and continues to care for his church, guaranteeing his protection and guidance," the pope said.

Through the sacrament of holy orders, he said, bishops, priests and deacons exercise the church’s maternity by generating new children of God with baptism, giving them new life in Christ, raising them in the faith, guiding them to the arms of a loving Father and nourishing them with the Eucharist and the word of God.

In his service, the ordained minister is "supporting us for our entire lives and embracing us with his tenderness and warmth, especially during the most fragile moments of trial, suffering and death," Pope Francis said.

"This maternity of the church is expressed in particular in the person of the bishop," who leads his community as "guarantor of their faith and as a living sign of the presence of the Lord in their midst."

This is why the role of a bishop "is not a position of prestige or an honorary office," he said. "It is a service. Jesus wanted it to be like this."

"There must be no place in the church for the worldly mentality," the mindset where men are seeking an "ecclesiastical career," he said.

"No, the church must not be a place for this mentality," he said. "The episcopacy is a service, not an honor to show off."

Every bishop must have Jesus as his model and guide, who, as the good shepherd, "came not to be served, but to serve," and gave his life for his flock, he said.

In the history of the church, the pope said, many holy bishops have shown that "this ministry is not sought, not requested, not bought, but is welcomed in obedience, not to elevate oneself but to lower oneself like Jesus."

The other important feature is the unity bishops display with one another and the pope, who is "custodian and guarantor of this deep communion," he said. "When Jesus chose and called the apostles, he imagined them — not separate from each other, everyone for himself, but together, that they be with him, united as one family."

Despite the geographical distances that normally separate them and the differences in cultures, the world’s bishops "listen together to the Lord and the Spirit" in prayer, scrutinizing the hearts of today’s men and women and reading the signs of the times, the pope said.

The entire Christian community, he said, is "called to nurture a sincere and deep communion" with their bishops, he said.