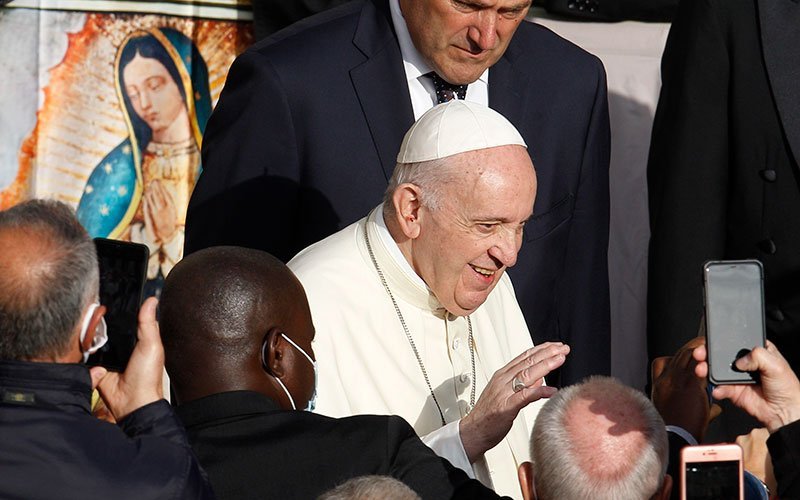 Pope Francis greets the crowd as he arrives for his general audience in the San Damaso courtyard at the Vatican Sept. 30, 2020. (CNS photo by Paul Haring)

The Vatican published the decrees Sept. 30, saying the pope authorized their promulgation Sept. 29.

The pope recognized the martyrdom of Father Francisco Castor Sojo Lopez and three other members of the Diocesan Worker Priests of the Sacred Heart of Jesus who were killed “in hatred of the faith” between 1936 and 1938, during Spain’s civil war. The decree clears the way for their beatification.

Among the other decrees, the pope recognized the miracle needed for the beatification of Gaetana Tolomeo, who was born in Catanzaro, Italy, in 1936 and died in 1997.

She spent her life confined to a bed or chair from paralysis and was often a guest on the local radio station, “Radio Maria,” seeking to share the Gospel with those who were suffering or in difficulty as well as with sex workers and people struggling with addiction.

The pope also recognized the heroic virtues of:

— Mother Francisca Pascual Domenech of Moncada, Spain, who founded the Franciscan Sisters of the Immaculate. She was born in 1833 and died in 1903.

— Mother Maria Dolores Segarra Gestoso, who founded the Missionaries of Christ the Priest. She was born in Spain in 1921 and died a few weeks before her 38th birthday in 1959.