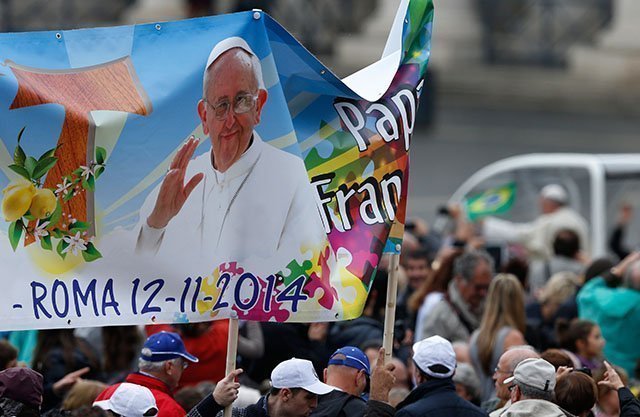 Pope Francis is pictured on a sign as he arrives, right, to lead his general audience in St. Peter's Square at the Vatican Nov. 12.

VATICAN CITY (CNS) — Pope Francis condemned the "absurd violence" being used against Christians in several countries and called on people of good will everywhere to take up the cause of religious freedom.

At the end of his general audience Nov. 12, Pope Francis asked the estimated 15,000 people in St. Peter’s Square to join him in reciting the Lord’s Prayer for Christians facing persecution.

"With great trepidation, I am following the dramatic incidents of Christians in several parts of the world being persecuted and killed because of their religious beliefs," the pope said. "I must express my deep spiritual closeness to the Christian communities so harshly struck by an absurd violence that does not show signs of stopping."

Calling on political leaders on the national and international level, as well as on "all people of good will," Pope Francis urged a global "mobilization of consciences" to protect persecuted Christians. "They have a right to find security and peace in their own countries while freely professing their faith."

In his main audience talk, Pope Francis continued his series on the church and its structure, focusing on the qualities necessary in its ministers.

"One does not become a bishop, priest or deacon because he is more intelligent or better than others," the pope said, "but only because of a gift: God’s gift of love poured out by the power of the Holy Spirit for the good of his people."

The church’s ministers, he said, must be aware of how merciful and compassionate God has been with them, because such honesty makes them "humble and understanding of others."

Recognizing that his call "flows only from God’s mercy and God’s heart" ensures that a minister "will never assume an authoritarian attitude, as if everyone were placed at his feet and as if the community were his property or personal kingdom," Pope Francis said.

"Woe to a bishop, priest or deacon who thinks he knows everything, who thinks he always has the right answer to every question and thinks he does not need anyone," the pope said.

While bishops and priests are called to "courageously safeguard" and share the teachings of the church, they also must recognize that they "always have something to learn, even from those who may still be far from the faith and from the church."

Working together, supporting one another and examining questions together, he said, the church’s ministers will demonstrate "a new attitude, one marked by sharing, co-responsibility and communion."

Pope Francis said St. Paul’s New Testament letters to Timothy and to Titus emphasize how the church’s ministers must have faith and a robust spiritual life — "which cannot be ignored because they are life itself." But the letters also outline human qualities a minister must have: "acceptance, moderation, patience, meekness, trustworthiness and goodness of heart."

Those human qualities, he said, help the church’s ministers go out to meet others with the attitude of respect necessary for offering "a service and a witness that is truly joyful and credible."