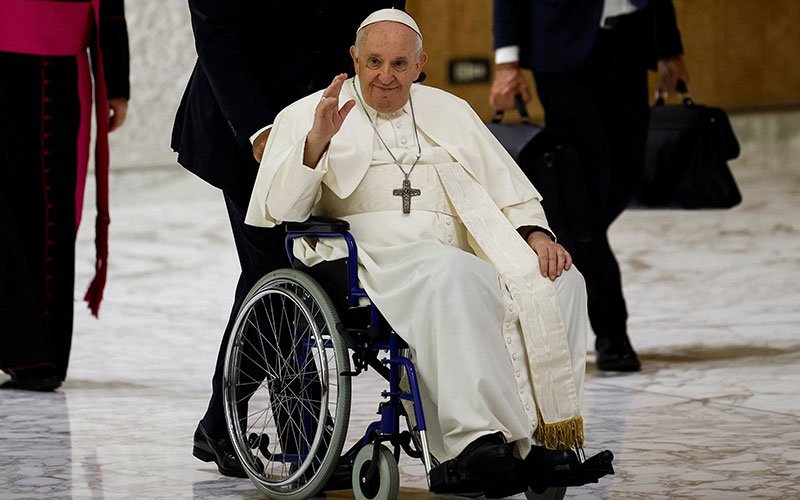 Pope Francis rides in a wheelchair as he arrives for his general audience at the Vatican Aug 24, 2022. (CNS photo by Guglielmo Mangiapane/Reuters)

VATICAN CITY (CNS) — Marking the six-month anniversary of the start of Russia’s war against Ukraine, Pope Francis renewed his appeal for prayers for an end to “the horror of war.”

Praying for all those being held prisoner, for the dead, for orphans and refugees, the pope also called for “concrete steps” to be taken “to end the war and avert the risk of a nuclear disaster in Zaporizhzhia,” a city in southeastern Ukraine and home to Europe’s largest nuclear plant. Both Russia and Ukraine have accused each other of shelling the plant, which has been under Russian occupation since March.

At the end of his general audience talk in the Paul VI hall Aug. 24, Pope Francis repeated his calls for peace, recalling the day marked six months since the start of the war.

“I renew my invitation to implore the Lord for peace for the beloved Ukrainian people who for six months now have been suffering the horror of war,” he said.

The pope said he was praying for those who have been imprisoned, particularly those who are in a vulnerable or “fragile condition,” and he called on authorities “to work for their liberation.”

“I think of the children, so many dead, and so many refugees, many of whom are here,” he said, indicating a number of Ukrainians seated in the Vatican audience hall.

“So many wounded. So many Ukrainian and Russian children have become orphans. Orphanity has no nationality. Both Russians and Ukrainians have lost a father or mother,” he said.

The pope said his mind was also on the amount of cruelty on display and the number of innocent people “who are paying for the madness.”

“The innocent pay for war”

“The madness is on all sides because war is madness, and nobody who is in a war can say, ‘No, I’m not crazy.’ The madness of war,” he said.

As an example, the pope spoke of “that poor girl flown into the air because of a bomb under her car seat in Moscow. The innocent pay for war. The innocent.”

While the pope did not identify the person by name, Vatican News confirmed the pope was referring to the Aug. 20 killing of 29-year-old Darya Dugina.

Dugina was a Russian journalist who strongly supported the war in Ukraine, and she served as press secretary for her father, Alexander Dugin — an anti-communist, ultra-nationalist philosopher calling for Russia to reclaim its former territories. Some reports speculated the father may have been the intended target of the attack.

Speaking to those gathered for his general audience, Pope Francis again criticized all those who profit from wars, including those selling arms, calling them “delinquents who murder humanity.”

Remembers victims of other wars

The pope also asked people to remember all the other wars being waged around the world, such as in Syria and Yemen, where children are suffering from hunger. He also highlighted the plight of the Rohingya people, “who wander the world because of the injustice of being driven off their land.”

“But today, in a special way, six months since the start of the war, let us think of Ukraine and Russia, two countries I consecrated to the Immaculate Heart of Mary, that she, a true mother of these beloved countries, that she looks upon Ukraine and Russia and brings them peace. We need peace,” he said.