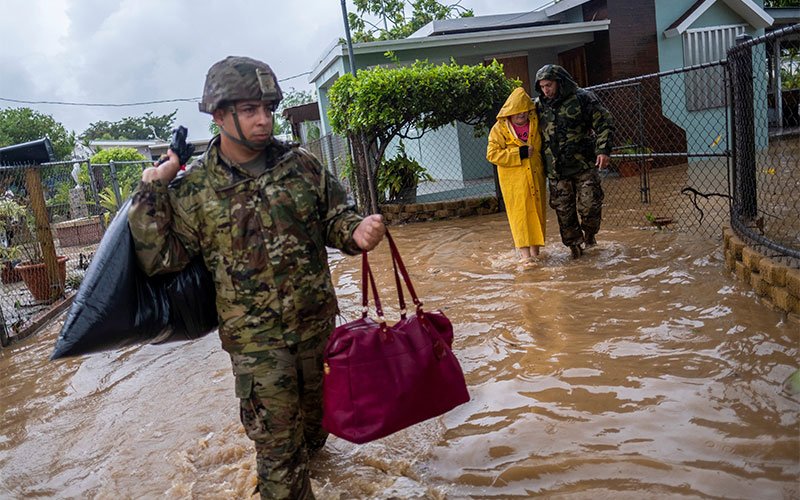 Members of the Puerto Rico National Guard rescue a woman stranded in her house Sept. 19, 2022, in the aftermath of Hurricane Fiona in Salinas, Puerto Rico. (CNS photo by Ricardo Arduengo)

VATICAN CITY (CNS) — As Hurricane Fiona swept across the Caribbean, leaving behind numerous victims and material destruction, Pope Francis called for greater solidarity in assisting all those affected.

In separate telegrams sent to the presidents of the bishops’ conferences of Puerto Rico and of the Dominican Republic Sept. 21, the pope assured them of his prayers, asking that God would offer his consolation to those suffering as a result of the natural disaster.

The telegrams, written on behalf of the pope and signed by Cardinal Pietro Parolin, Vatican Secretary of State, were sent to Bishop Rubén Antonio González Medina of Ponce, Puerto Rico, and Archbishop Freddy Antonio de Jesús Bretón Martínez of Santiago de Los Caballeros, Dominican Republic, the presidents of the conferences.

The pope was “deeply distressed to learn of the natural disasters that have struck” both countries due to Hurricane Fiona, the telegrams said.

The hurricane touched down in Puerto Rico Sept. 18, causing massive flooding, wind damage, power outages and the shutdown of water service across a large part of the island, affecting millions of residents and leaving at least two people dead, officials said.

The hurricane caused worse damage in the Dominican Republic as it picked up strength moving north, triggering mudslides and destroying hundreds of homes. At least two people were killed — one by a utility pole, another by a tree, which were toppled by gusting winds.

In the papal telegram, the pope asked that all Christians and people of goodwill increase their efforts of “solidarity to help those affected by this calamity and therefore show that fraternal closeness to which we are all called.”

The hurricane hit Turks and Caicos Sept. 20, and gusts were recorded as high as 155 miles an hour Sept. 21 as it headed toward Bermuda.