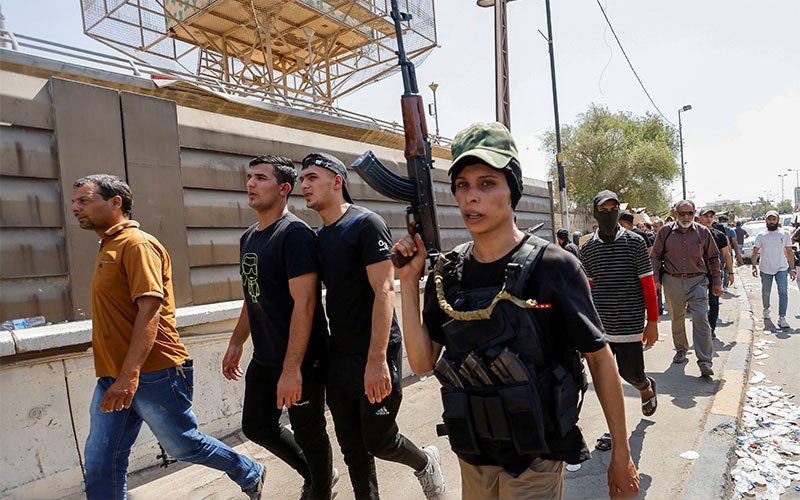 Followers of Iraqi cleric Muqtada al-Sadr withdraw from the streets after violent clashes near the Green Zone in Baghdad Aug. 30, 2022. (CNS photo by Ahmed Saad/Reuters)

VATICAN CITY (CNS) — After a series of deadly clashes erupted in Iraq, Pope Francis said “dialogue and fraternity” were needed to overcome the current situation and to become a nation of diverse communities living in peace.

The pope said he was following the news of “violent events” unfolding in the country, which he fondly recalled visiting in 2021.

It was during that visit, he said at the end of his weekly general audience Aug. 31, that he experienced firsthand the people’s “great desire for normality and peaceful coexistence among the different religious communities” in Iraq.

“Dialogue and fraternity are the right path for facing the current difficulties and to reach this goal” of peace, he said.

He asked that people pray that God give the gift of peace to the Iraqi people.

At least 30 people were killed and hundreds more injured in Baghdad in clashes Aug. 29 and Aug. 30 when supporters of Shiite cleric Muqtada al-Sadr stormed the presidential palace after fighting with Iraqi security forces and militia groups allied with Iran.

The violence also spread to other parts of the country when supporters of al-Sadr attacked places linked to groups aligned with Iran.

The cleric called for calm and an end to the fighting late Aug. 30.

The Associated Press reported that Iraq’s government has been deadlocked since al-Sadr’s party won the largest share of seats in October parliamentary elections — but not enough to secure a majority government. That led to months of political infighting between al-Sadr’s Shiite followers and his Iran-backed Shiite rivals before it became violent Aug. 29, AP reported.

Iraqi Prime Minister Mustafa al-Kadhimi said the government needed to find out who fired on the protesters — despite orders not to use live ammunition — and who opened fire on governmental institutions.