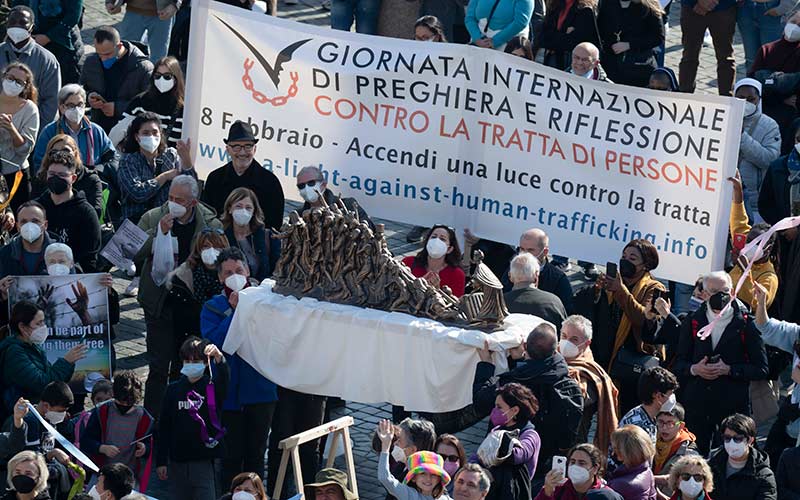 People hold a statue associated with St. Josephine Bakhita as Pope Francis leads the Angelus from the window of his studio overlooking St. Peter's Square at the Vatican Feb. 7, 2022. In his remarks, the pope encouraged people not to despair, but to invite Jesus into their lives. (CNS photo by Vatican Media)

“Faced with these scourges of humanity, I express my sorrow and I urge all those with responsibility to act decisively to prevent both exploitation and the humiliating practices that afflict women and girls in particular,” the pope said Feb. 6, the International Day of Zero Tolerance for Female Genital Mutilation.

After praying the Angelus with visitors in St. Peter’s Square, the pope said, “Approximately 3 million girls undergo this operation every year, often in conditions that are very dangerous to their health.”

“This practice, unfortunately widespread in various regions of the world, demeans the dignity of women and gravely undermines their physical integrity,” he said.

The pope also highlighted the upcoming celebration the International Day of Prayer and Awareness Against Human Trafficking, Feb. 8, the liturgical memorial of St. Josephine Bakhita.

He called the crime of human trafficking “a deep wound, inflicted by the shameful pursuit of economic interests without any respect for the human person.”

“So many girls — we see them on the streets — who are not free, are slaves of traffickers, who send them to work and, if they do not bring the money, beat them. This is happening in our cities today. Let us really think about it,” he said.

The pope greeted women religious in the square who are part of the Talitha Kum network, working against human trafficking.

“Thank you for what you do, for your courage. Thank you. I encourage you in your work,” he said before blessing a statue of St. Josephine Bakhita by artist Timothy Schmalz. The artwork, “Let the oppressed go free,” was dedicated to victims of trafficking and to all women, particularly women religious who are committed to their liberation.

Talitha Kum networks are active on five continents coordinating the anti-trafficking efforts of more than 3,000 women religious from different congregations, friends and partners. They care for victims and seek solutions to the inequalities that make people vulnerable to traffickers.

Talitha Kum coordinates the work of the partner organizations that prepare the world day of prayer, which was dedicated this year to “The power of care. Women, economy and human trafficking.”

People were invited to join an online prayer marathon at www.preghieracontrotratta.org from 9 a.m. to 5 p.m. Central European Time (3 a.m.  to 11 a.m. EST) and spanning the different time zones from Oceania, Asia and the Middle East on to Africa, then Europe and finally South and North America.

Also, after the Angelus prayer, the pope appealed for the protection of all human life.

Noting Feb. 6 marked the “Day for Life” in Italy, the pope said, “This appeal is valid for everyone, especially for the most vulnerable categories: the elderly, the sick, and even children who are prevented from being born.”

“I join the Italian bishops in promoting the culture of life as a response to the logic of rejection and to the demographic decline. Every