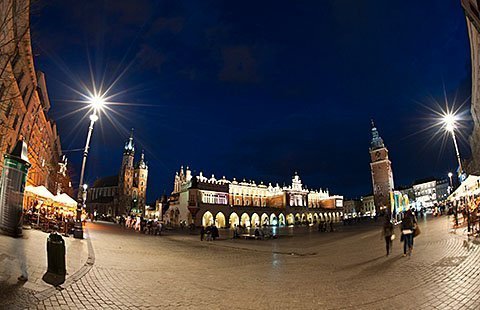 The city's main square and St. Mary's Basilica are seen in a nighttime view of Krakow, Poland. The polish city, the former see of soon-to-be saint Blessed John Paul II, will host the next international gathering of World Youth Day in 2016.

VATICAN CITY (CNS) — Pope Francis has asked Catholic young people around the world to read, meditate and act on the beatitudes as they celebrate World Youth Day in their dioceses in 2014 and 2015 and as they prepare to join him in Poland in 2016.

Taking the text of the beatitudes from the fifth chapter of the Gospel of Matthew, Pope Francis has chosen the themes for World Youth Day celebrations for the next three years, the Vatican announced Nov. 7.

The annual Rome diocesan celebration with the pope is held on Palm Sunday each year; the date of the celebration in other dioceses varies.

The themes chosen by the pope, the Vatican said, were:

In addition to being the former see of Blessed John Paul II, the Archdiocese of Krakow is home to the Shrine of Divine Mercy, encouraging the devotion promoted by St. Faustina Kowalska, a Polish nun. The saint said she had a vision of Jesus, who said he would show mercy to those who pray for it and who share that mercy with others.

Announcing the themes, the Vatican noted that during World Youth Day in Rio, Pope Francis asked young people to read the beatitudes and make them a blueprint for their lives.