Pope: Christian faith is an intimate relationship with the Lord - Catholic Courier 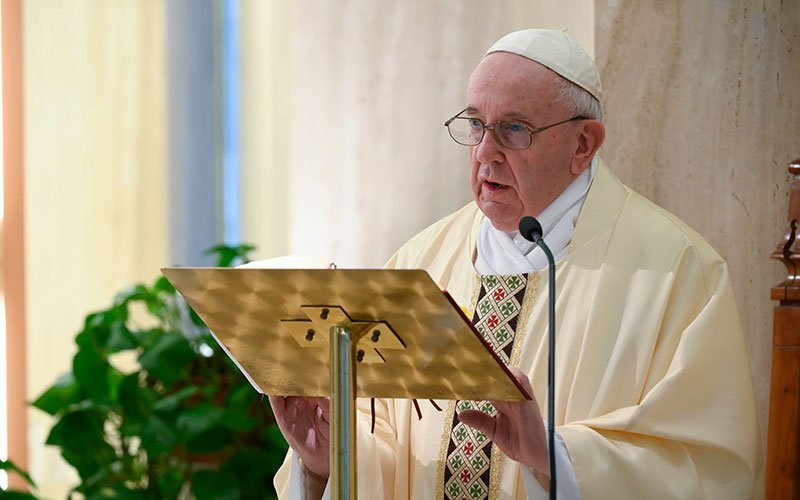 Pope Francis celebrates Mass in the chapel of his residence, the Domus Sanctae Marthae, at the Vatican May 13, 2020. (CNS photo by Vatican Media)

VATICAN CITY (CNS) — When most Catholics hear the Gospel reading about the vine and the branches, they focus on Jesus saying that God prunes the branches, so the vine bears more fruit, Pope Francis said.

But the story also is about how intimately connected Jesus is to each of his followers and how much the vine relies on the branches to grow and produce fruit, the pope said May 13 during his early morning Mass in the chapel of the Domus Sanctae Marthae.

The pope began the Mass praying for students and teachers still looking for the best ways to learn, teach and wrap up the school year during the COVID-19 pandemic. “May the Lord help them in this journey and grant them courage and success,” he said.

In his homily, Pope Francis focused on the day’s Gospel reading, Jn 15:1-8, in which Jesus tells the disciples to remain in him as branches attached to the vine, and he promises to remain in them.

The example of the vine and the branches, he said, highlights how the branches need their connection to the vine for nourishment, but also how the vine needs the branches because that is where the fruit grows — it is not attached directly to the trunk.

“But there is more,” he said. “Without Jesus we can do nothing, like branches without the vine. And he — pardon me, but it’s the Lord who says it — without us it seems that he cannot do anything because the branch bears the fruit, not the tree.”

If one can say that Jesus “needs” something from his followers, it is witness, the pope said. “Give witness in his name so that the faith, the Gospel spreads.”

“Often when we talk about the vine and the branches, we stop with the figure, the task, of the farmer — the Father — who prunes the branch so that it bears fruit and cuts and throws away those that don’t bear any,” he said.

The admonition is important, the pope said, but there is more to the story.

The story helps people endure the difficulties of life and see ways God is correcting them, he said. “But let’s not stop there. Between the vine and the branches there is this intimate remaining. The branches — we — need the sap, and the vine needs the fruit of witness.”