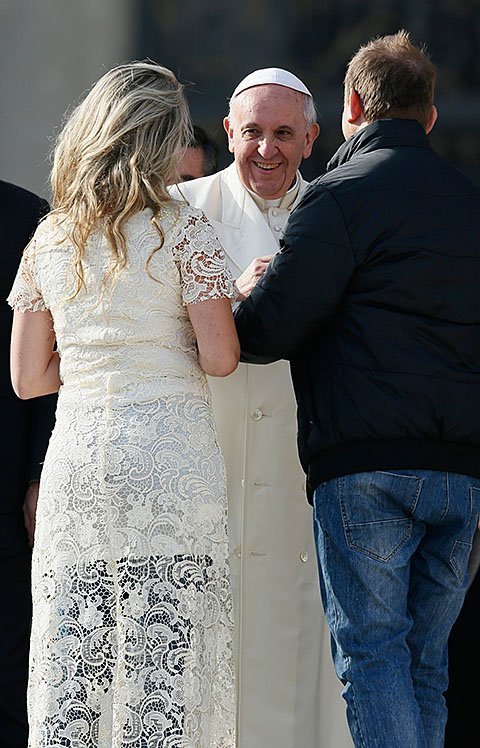 Pope Francis greets a couple at the end of his general audience in St. Peter's Square at the Vatican Jan. 8.

VATICAN CITY (CNS) — Christians must love through concrete actions, not words, which are just whisked away in the wind, Pope Francis said.

True love knows it’s more important to give — "give things, give life, give oneself to God and others" — than receive, the pope said in his homily Jan. 9 during his morning Mass in the Domus Sanctae Marthae, where he lives.

Christian love is generous and real, it’s not some dreamy romantic notion and "not the love on soap operas," he said, according to Vatican Radio.

When Jesus spoke of love, "he speaks to us of concrete things: feed the hungry, visit the sick," and more, the pope said.

"When there isn’t this concreteness, one can be living a Christianity of illusion because the person doesn’t really understand the core of Jesus’ message," he said.

The pope said there were two things that make Christian love concrete.

"First, love with actions, not with words. The wind whisks words away; today they’re here, tomorrow they’re not," he said.

The second thing is "for love, it’s more important to give than receive."

"A person who loves, gives and gives," he said, while someone who doesn’t love "is self-centered, always tries to receive, always looks to have things, have perks."

Instead, people need to have an "open heart" that isn’t hardened against God, but lets him remain in them as they in him.

"Many times we kick him out and we can’t remain in him, (but) it’s the Holy Spirit that remains," he said.