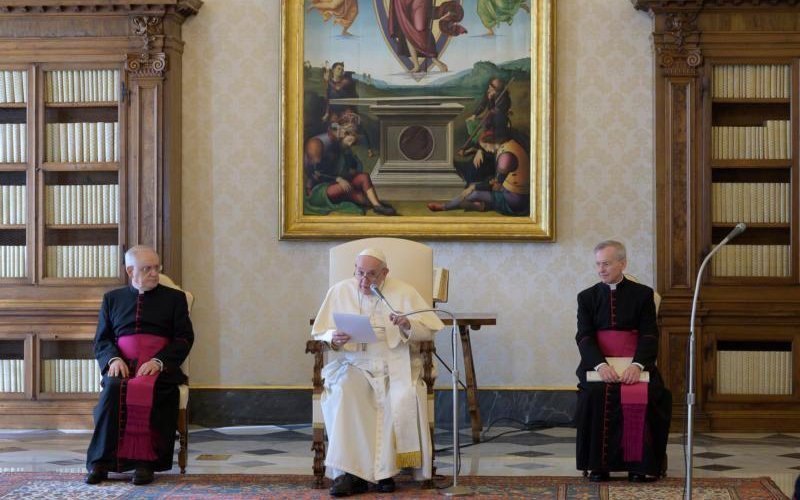 Pope Francis leads the general audience from his library in the Apostolic Palace at the Vatican March 11, 2020. (CNS photo by Vatican Media)

VATICAN CITY (CNS) — Amid a nationwide lockdown due to the coronavirus epidemic, Pope Francis soldiered on with his weekly general audience and called on people to not forget those who suffer from war and violence.

During a live broadcast from the library of the Apostolic Palace March 11, the pope said he did not want “this sorrow, this epidemic, to make us forget the poor Syrians who are suffering on the border of Greece and Turkey.”

Thousands of men, women and children have crowded the Turkish side of the Greek border after Turkish President Recep Tayyip Erdogan opened the border to refugees and migrants until the European Union meets his demand to add some $3.5 billion in funding for the refugees’ stay in Turkey, in addition to the approximately $6 billion Turkey has already received.

The action violates a deal Turkey struck with the EU to close its borders after 1 million migrants flooded into Europe from Turkey during the 2015-16 migrant crisis. Critics have accused Erdogan of weaponizing the Syrian refugee humanitarian crisis.

The Syrian refugees are “people who have suffered for years, fleeing war, hunger and sickness,” the pope said. “Let us not forget our brothers and sisters, so many children suffering there.”

Far from the crowded and festive atmosphere of the general audiences in St. Peter’s Square, the setting in the papal library was formal. The pope was flanked by two aides sitting a yard away from him on either side; eight translators also were present to read summaries of his main talk in a variety of languages.

But the pope still took time, as he often does during the audience, to remember the sick, especially those infected with the coronavirus.

“In this moment, I would like to greet the sick who are infected with the virus, those who suffer illness and the people who suffer uncertainty with their illness,” he said.

He also thanked the countless doctors, nurses and health care volunteers who “are close to the people who suffer,” as well as those who are close to the afflicted through prayer.

“I thank all the Christians, all the men and women of goodwill, who are praying in this moment,” the pope said. “All who are united no matter their religious belief, thank you for this effort.”

The pope continued his series of talks on the Eight Beatitudes by reflecting on the fourth beatitude, “Blessed are they who hunger and thirst for righteousness, for they will be satisfied.”

Hunger and thirst, he explained, are not a mere “generic desire but a vital and daily need.”

Jesus’ words, he added, aren’t addressed to those who seek revenge because “the hunger and thirst for justice of which the Lord speaks to us is even deeper than the legitimate need for human justice, which every man and woman carries in their heart.”

“In every heart, even in the person who is most corrupt and far from good, there is a hidden yearning for the light; even if he or she is under the rubble of deception and error, there is always a thirst for truth and goodness, which is the thirst for God,” the pope said.

For this reason, he continued, the church is called to proclaim the word of God to all because “the Gospel of Jesus Christ is the greatest justice that can be offered to the heart of humanity, which has a vital need of it, even if (humanity) is not aware of it.”

“It is the Holy Spirit who arouses this thirst,” Pope Francis said. “He is the living water that has shaped our dust; he is the creative breath that gave it life.”