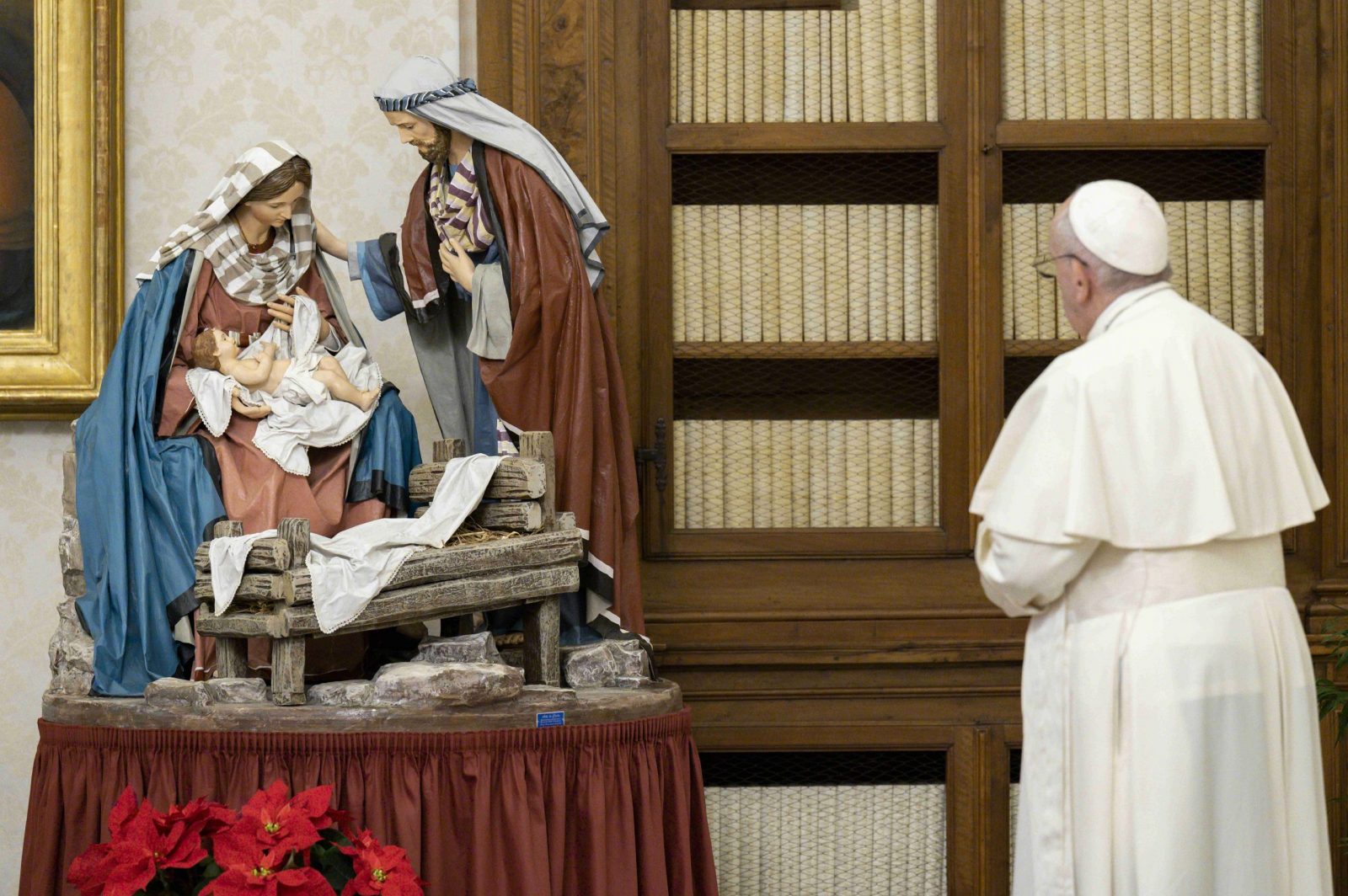 Pope Francis pauses in prayer before a Nativity scene in the library of the Apostolic Palace at the Vatican Jan. 3, 2021. At the end of his Angelus address later, he encouraged Catholics to spend time in prayer before the creche "to savor the tenderness of God," who sent his son born in a manger. (CNS photo by Vatican Media)

By taking on the frail human condition, God showed his love for humanity and his desire to share in people’s joys and sufferings, Pope Francis said.

During his Sunday Angelus address Jan. 3, the pope said that God made the “bold” decision to become human “to tell us, to tell you, that he loves us like that, in our frailty, in your frailty, right there, where we are most ashamed, where you are most ashamed.”

“He enters into our shame, to become our brother, to share the path of life,” he said.

After praying the Angelus prayer and renewing his good wishes for the new year, Pope Francis said that Christians, without resorting to “the mentality of fatalism or magic,” know that “things will improve to the extent that, with God’s help, we work together for the common good, placing the weakest and most disadvantaged at the center.”

“We do not know what 2021 holds for us, but what each one of us, and all of us together, can do is to take care of each other and of creation, our common home,” he said.

Nevertheless, he also warned of the temptation to “take care only of our own interests, to continue to wage war,” or to live “hedonistically, that is, seeking only to satisfy our own pleasure.”

Pope Francis said he had read in a newspaper about a country, “I forget which,” where people were leaving in private planes to “flee lockdown and enjoy the holidays.”

“But those people, good people, did they not think about those who stayed at home, about the economic problems faced by many people who have been laid low by the lockdown or about the sick?” he asked. “They thought only about taking a holiday for their own pleasure. This pained me greatly.”

In his main talk, the pope reflected on the prologue of the Gospel of St. John, in which the evangelist says that “the Word became flesh and made his dwelling among us.”

Calling Christ “the Word,” the pope explained, “means that from the beginning, God wants to communicate with us, he wants to talk to us.”

However, he continued, St. John’s specific use of the word “flesh” instead of a more “elegant” expression to define Christ’s humanity is meant to highlight “our human condition in all its weakness, in all its frailty.”

“He tells us that God became fragile so he could touch our fragility up close,” the pope said. “So, from the moment that the Lord became flesh, nothing about our life is extraneous to him. There is nothing that he scorns; we can share everything with him, everything.”

Moreover, the pope said that Christ didn’t “put our humanity on like a garment that can be put on and taken off”; rather he “united himself forever to our humanity,” suffered, died, rose from the dead and ascended into heaven, body and soul.

As the Christmas season continued, Pope Francis encouraged Catholics to “pause in silence before the creche to savor the tenderness of God who came close (to us), who became flesh. And without fear, let’s invite him among us, into our homes, into our families.”